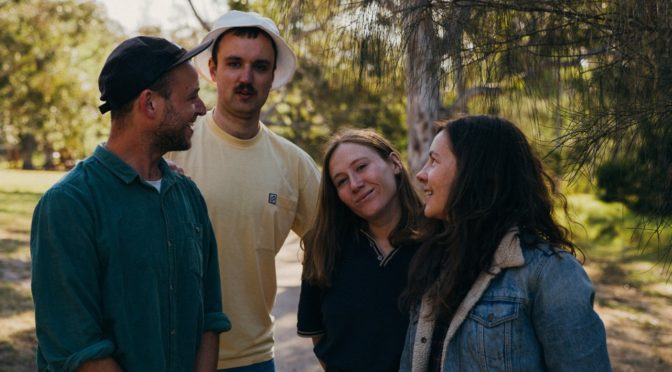 Playing at the Grampians Music Festival in 2020, we asked Quivers to share 5 things about themselves that we didn’t know.

1. Singer Sam met Ringo Starr when he was 10 years old. It was through Make-A-Wish-Foundation in Pittsburgh, Pennsylvania and he played with his all-star band which at that time had Jack Bruce from Cream and Peter Frampton but no longer Todd Rundgren. Ringo was so easy to talk to and they drank coca cola pre-show and talked about trout-fishing in Tasmania (George Harrison & Eric Clapton used to fly private planes down to remote lakes on the reg apparently).

2. Quivers drummer/singer/manager Holly Thomas was just featured in the Drumscene drumming magazine and it was the best thing ever. She drums for Husky and a heap more amazing bands and we are so thankful that we get to make music with her on the reg because (1) she is in drumming magazines and (2) we love her so much.

3. For some of our first gigs we had 8 people in the band. We somehow convinced our favourite Tasmanian festival called Panama to let us also have a choir of about 10 friends also which was a pretty good way to get everyone to the festival. For a while there we had horns and extra singers and keyboards and made a racket. It’s a great feeling to be surrounded by that many friends, especially when our earliest songs were a lot about processing grief and loss and doing that in a communal way can help sometimes. We’re now usually a 4-piece but that communal feeling is always there.  There is a comfort in making music that sometimes falls apart and puts us back together again.

4. One night in Brisbane we recently played as a cover band.  After our show the manager said the downstairs cover band didn’t show up and punters wouldn’t notice if we just pretended our songs were covers. We played for two hours and bluffed our way through some Fleetwood Mac (Bella slayed Dreams of course), and then remembered we were in Brisbane and just played Powderfinger songs while passing the microphone around the room because we didn’t know the lyrics. Just when you think you hate Powderfinger you realise their songs are in your blood.

5. We love karaoke so much it hurts us. Holly’s last birthday party was a karaoke night and the next day Sam’s tinnitus kicked in and hasn’t left since. Mike’s go to song is Unchained Melody by the Righteous Brothers and it is unstoppable. On tour we always want to go sing karaoke after shows but it really shreds your vocals. It’s weird that we are touring enough now we have to be semi-professional about looking after our voices. We have to say no to singing Savage Garden at 3am and it hurts half as much as heartbreak.

——-
What are you looking forward to the most at Grampians Music Festival 2020?

The thing we are most looking forward to at Grampians Music Festival is music being that close to huge vistas we’ve never seen. We are so lucky to play and hear music in jaw dropping landscapes, and it is such a different experience of music than in a city club. So our answer is nature and also seeing Julia Jacklin again.