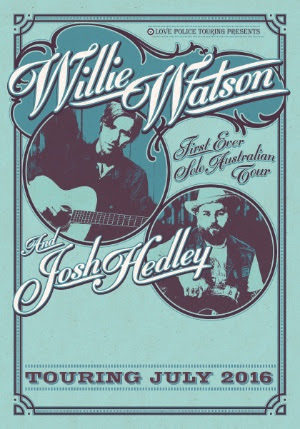 Willie Watson and Josh Hedley will arrive next week to commence what will be a rollicking ride down our East Coast of folk, country, blues and good ol’ times. Starting in Brisbane then onto Bellingen for Bello Winter Music, then Sydney, then Melbourne and Meeniyan.

Sydney’s Newtown Social Club has now sold out, but an intimate show has been added at Gardel’s Bar at Porteno on Wednesday July 13. Tickets are very limited and are only available by calling 02 – 8399 1440.

Meeniyan Town Hall has sold out, as will the Northcote Social Club and Caravan Music Club real soon.

Willie Watson, who captured fans on his recent trip down under as part of the Dave Rawlings Machine, is a singer-songwriter, guitarist, and banjo player who hails from Watkins Glen in upstate New York and was a founding member of the most respected bands within the realm of modern Americana, Old Crow Medicine Show. Released in 2014 his debut solo album, Folk Singer Vol. 1, was produced by Dave Rawlings and was described by Rhythms Magazine as “relentlessly riveting” and by respected Americana blog Post To Wire as “Highly recommended.”

Josh Hedley may have been born and raised in Naples, Florida but is no stranger to our musical venues having toured here with Justin Townes Earle and more recently as part of the Out on the Weekend House Band in October 2015 and in his 11 years as a Nashville musician he has been a mainstay in all the legendary honky tonks and has played with the likes of Jack White, Dan Auerbach, Nikki Lane, Justin Townes Earle, Yelawolf and Jonny Fritz who pushed him to pursue a career as a singer and songwriter and with the greats like George Jones and Merle Haggard in mind, Joshua plans to take over the world with his own brand of traditional country music.

Opening for Willie and Josh in Brisbane will be Imogen Clark, in Sydney at the Newtown Social Club Elwood Myre and at the Melbourne’s Northcote Social Club Freya Josephine Hollick will kick start preceding’s.