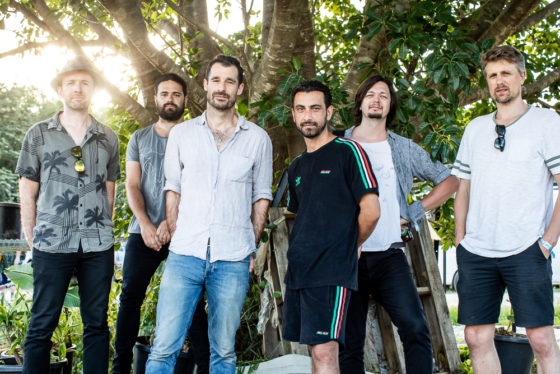 Australia’s kings of real good, feel good roots pop, The Cat Empire return home for another triumphant lap around the country this October and November still riding high on the success of their most recent studio album, Stolen Diamonds.

7 albums into to a stellar career, these 6 musicians originally hailing from Melbourne began as a word of mouth secret transported globally by backpackers, fast became an international touring juggernaut with legions of devotees at every stop.

In 2019, an empire of loyal Australian fans will again have the opportunity to celebrate the band’s most recent acclaimed material and revisit some of the enduring, and indeed endearing classics that have secured their status as one of the world’s most beloved live acts.

Along for the ride is special guest, Grace Barbe, a genuinely exotic world music star for the 21st century, with the talent, face and voice to match.

It would be an exercise in understatement to suggest the previous 12 months have been particularly busy for The Cat Empire. Multiple sold out tours across Europe, The Americas and of course Australia, acclaimed side projects, grant collaborations and mentoring, all while releasing a song a month from Stolen Diamonds across 2018/19 which drew ecstatic response from fans and critics alike.

The Courier Mail in Brisbane claimed in their 4 star review of Stolen Diamonds that the sextet “still sound self-assured and diverse as ever.” Praise was not only reserved to their home country as the UK’s Daily Express joined in the praise effusing the band’s “energetic and thrilling sound.”

Stolen Diamonds debuted at #4 on The ARIA album chart (their 6th top 10 album), at #1 on the AIR Charts, and at #3 on the global albums charts for iTunes on release day.

To coincide with this latest tour The Cat Empire have also announced a new global partnership with Children’s Ground, an organisation designed with – and led by – First Nations people who are creating a different future for their children and grandchildren. Children’s Ground delivers early childhood and primary learning, health, employment, creative arts and community development, within a culturally rich environment and a 25-year vision for change. Among a number of planned activations to support the cause, The Cat Empire will be pledging $1 from every ticket they sell on their Australian tour in Oct/Nov to Children’s Ground.

It has been long rumoured that The Cat Empire headline major festivals all over the world because no band is brave enough to take the stage after them. Such is the power of their live show and world class musicianship, which sees their infectious, genre-embracing anthems sweep audiences into a dancing, singing frenzy of waving arms and smiling faces.

With more dates to be added…

Ticket details can be found at www.thecatempire.com