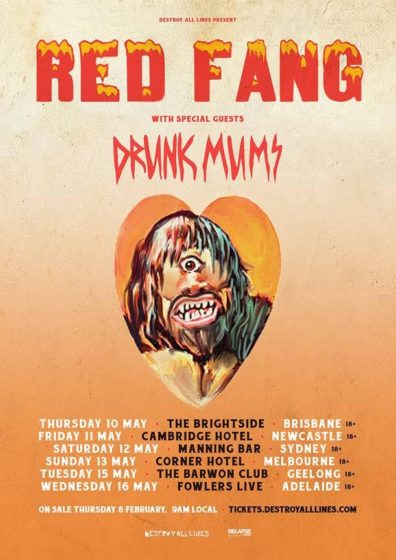 American sledgehammer stoner metal giants RED FANG are returning to Australia, so hold onto your beard, because things are going to get messy!

RED FANG, in its own nutty fashion, turn distortion rock into an imperious form of Rock Theatre, at times with its tongue rammed as far as its cheek muscles will contain it.

Joining the tour, will be local rockers DRUNK MUMS and you’d be hard pressed to find someone that’s into rock and roll that doesn’t get lost in one of their live shows.

Prepare for a stoner sludge avalanche in all its Rock-n-Roll glory. The RED FANG live show is jagged mother of nitro rock and it’s “akin to a landslide ploughing into bystanders who are more than eager to be swept away by their corpulent arsenal. Ever teetering on the edge of apocalyptic rumble and good-time groove, the mammoth fuzz just keeps on coming “– Metal Hammer