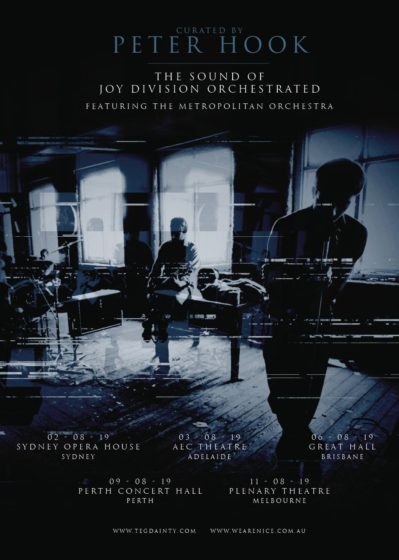 The group’s original bassist Peter Hook, The Metropolitan Orchestra & guests come together to perform the catalogue of one of the world’s most celebrated bands.

Joy Division’s legendary bass player Peter Hook is set to tour Australia with The Metropolitan Orchestra this August for a string of five concerts which will see him, special guests and a full orchestra perform the band’s seminal post punk repertoire with classical elements.

Having sold out the debut concert at London’s Royal Albert Hall in July 2019, the Australian dates are the first outside England to be announced and follow on from Hooky’s many successful tours of Australia with both The Light and New Order.

“Peter Hook & The Metropolitan Orchestra present Joy Division Orchestrated” celebrates one of the most influential bands ever and put that group’s most famous works in an immersive show that recognises their role in shaping popular culture and the influence they continue to hold.

The show is curated by Peter Hook acting as Executive Producer with Musical Director Tim Crooks taking care of the orchestration. The concerts are the first time that an original member of the group has taken part in such a project to remember its decisive back catalogue.

One of Australia’s most versatile and independent orchestras, well established for over a decade now, The Metropolitan Orchestra is joining the tour for all dates, having previously worked with the cream of the world’s vocalists and musicians and concert tours with Basement Jaxx and the BBC (Dr Who / Blue Planet).

“Orchestrated” pairs up musically the elements of post punk that characterised Joy Division’s ground-breaking sound with the orchestra, paying homage to the spirit which defines their heritage.

Given the band’s iconic legacy, the arrangements of classic Joy Division are to be presented in a state-of-the-art concert setting with the highest standards of production.

As the band tragically ended on the eve of their first American tour in May 1980, Joy Division’s influence round the world has grown remarkably since and remains now ever present, with fans of all generations complimented by the many contemporary groups who have taken on the template of the band’s sound in the modern era.

Across their two LPs and singles, all produced by Martin Hannett for Factory Records, the band’s landmark tracks are to be featured in “Orchestrated”, including from the band’s debut album considered by many the finest debut release by any group. Meanwhile the follow up, is described as a “start to finish masterpiece” (Pitchfork). Their singles are regularly lauded as some of the greatest ever to hit vinyl.

About bringing the Orchestrated concert to Australia, Peter Hook commented;
“When we began to celebrate Joy Division with The Light in 2010, Australia was one of our first international visits. Our seventh gig came in Melbourne and as always down under, the reactions were amazing. Over the years I’ve come to love visiting Australia more and more, the people are wonderfully hospitable and to be able to bring the show here, straight from the Royal Albert Hall, is a tremendous honour.

“In my recent work with orchestras, I realised that my first group could also lend itself to this treatment. Post punk is already dramatic, this will accentuate and take it to another performing and emotional level. “

“I’ve been very impressed with how our arranger Tim Crooks works and I know the band’s canon will be treated with great reverence and care, enthusiasm and passion as the originals were. I know everyone involved will be adding something very special.”

Tim Crooks added “To be given the opportunity to present the music of Joy Division with Hooky is a great privilege. The process for me involves peering through the veil of history to create an immersive experience that retains the anarchic, raw spirit of the originals. Modern life is rubbish. This is analogue, unfettered and live.”

Do not buy from unauthorised resale scalper websites. You risk buying invalid or fraudulent tickets.