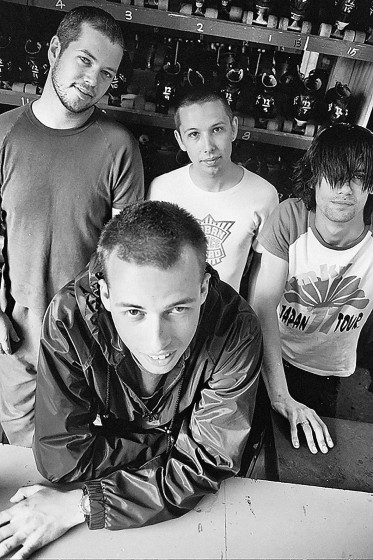 Post-grunge Aussie rockers, Grinspoon have announced a 20th Anniversary deluxe edition of the album that kickstarted their long-standing music career, Guide To Better Living, alongside an epic national tour of Australia, playing the album cover to cover for fans throughout June, July, August and September (2017).

It’s 1995. A band from Lismore named Grinspoon (named after Associate Professor Emeritus of Psychiatry at Harvard Medical School, Dr Lester Grinspoon who supported the medicinal use of marijuana) submitted the track, Sickfest to triple j’s Unearthed national band comp in its inaugural year. To everyone’s amazement, they won – and for the next two months the song was the station’s number one request. Fast forward to September 1997, signed to Universal Music’s Grudge imprint, Grinspoon released their debut album, Guide To Better Living.

Going on to boast double-platinum accrediation on the back of five singles; Pedestrian, DC×3, Repeat, Just Ace and Don’t Go Away – Guide To Better Living (GTBL) spent 36 weeks in the ARIA Top 50. The album stands now as a similar coming of age as The Angels’ Face to Face, Cold Chisel’s East and Midnight Oil’s 10, 9, 8… were at the time. Since then, it’s been a rolling success and yeah, occasionally, excess story with certified sales of well over half a million, seven albums all very familiar with the Top Ten, ARIA Awards, 13 ARIA nominations, more than 1,000 gigs, tens of thousands of international frequent flyer miles, 7 appearances at the Big Day Out as well as slots at Homebake, Falls Festival, Splendour in the Grass, an NRL Grand Final and a Commonwealth Games Closing Ceremony in Melbourne.

Twenty years later – with the album chalking up a double decade of acclaim – Grinspoon are emerging from hiatus to celebrate their debut album with the Guide To Better Living tour. Supported nationally by Hockey Dad, they’ll beplaying the album cover to cover across June-September 2017, alongside a selection of later favourites from their albums that followed. The tour takes in 26 dates across the nation – the first tour of such scale since the band went on hiatus in 2013, broken only for a support slot on Cold Chisel’s Perfect Crime tour of Australia in 2015.

Candidly chatting about the 20th anniversary of their monumental debut release, vocalist Phil Jamieson jests, “I hate nostalgia, it gets my goat. What I do love are tunes, and we’ve got tunes! NBT – Balding Matters – Scalped are probably what are considered to be album tracks or ‘filler’, but I can’t wait to spit ‘em out with as much venom as I did as a 19 year old. Then there is Railroader – Repeat – Just Ace – Champion – Boundary …. it’s like a little treasure box of ditties! I don’t think I really knew what I was doing when I made Guide To Better Living, but I know that playing this album from start to finish is going to be one of the most challenging, enjoyable & kickass things I’ll ever do! Bring on the road, bring on the tour, bring on the shows… happy 20th birthday GTBL!”

To correspond with the tour, an accompanying expanded, multi-format reissue of the album will be released on June 23. Grinspoon have curated a 20th Anniversary edition of Guide To Better Living, expanding the original 16-track album to a mammoth 49 track feast of rarities, live tracks and unreleased recordings. The album also appears on vinyl for the very first time in the form of a limited edition red vinyl pressing, coupling the original album with a second disc Live At CBGB’s – an incendiary 10-track live recording of the band taken from the fabled CBGB’s venue in New York. The recording was found in a scour of the vaults late in 2016. The physical 2CD edition is packaged in a deluxe slipcase, alongside a 36 page book featuring unseen images, scans of memorabilia, full lyrics and essays from each of the band members.
The original 16 track album is augmented with Live recordings, rare B-Sides and an unreleased track ‘Green Grass Meadow’ recorded at the time of Guide To Better Living, unheard until now. The set is finished off with a previously unreleased 13-track performance from the Falls Festival of 1997. 49 tracks in all!

“IIt’s a real honour to be releasing the 20th Anniversary of Guide To Better Living. It was an amazing time in the band’s life. Going back and listening to the album and watching old footage reminds me of what was an unbelievably exciting time in all our lives,” says guitarist Pat Davern.

Grinspoon is Phil Jamieson on vocals, Pat Davern on guitar, Joe Hansen on bass and Kristian Hopes on drums.

Telstra is offering their customers an exclusive Telstra Thanks 48-hour pre-sale on most shows from 9am Wednesday 5 April 2017. For more details regarding the pre-sale, please visit www.telstra.com/music.

Velocity Frequent Flyer is offering a pre-sale window for a limited time to Velocity members, available via Velocity Live from 11am Friday 7 April 2017 until 8am Monday 10 April 2017.

The general public will have the opportunity to purchase tickets from 9am Monday 10 April 2017.

For further information, head to www.grinspoon.com.au.