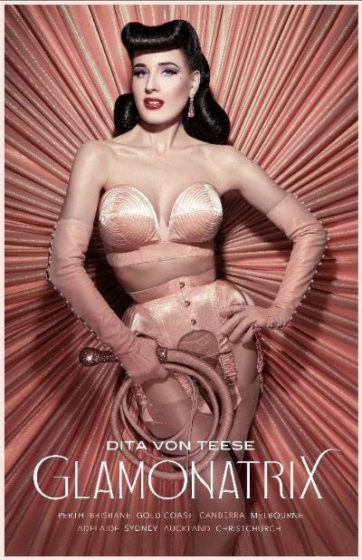 The ever-dazzling International Queen of Burlesque, Dita Von Teese, is set to return to Australia this November with the most lavish touring burlesque show in history with her all-new revue, DITA VON TEESE: GLAMONATRIX.

The 10-date tour will start in Perth on the 19 November and will travel across all capital cities, Canberra and the Gold Coast. This will be Dita’s third tour of Australia and follows two previous sold out national runs.

The “Glamonatrix” tour boasts no less than four spectacular all-new acts for Dita, each one more lavish than the last. Smothered in Swarovski crystal, she reinvents the classic burlesque “surprise cake” routine with a massive bejeweled cake, freshly served with a delightful whimsicality. For the jaw-dropping “Lipteese” number, Dita evokes a John Willie retro-fetish dream, riding her giant sparkling lipstick to energetic remixes from her album by French artist Sebastien Tellier and Australian electronic dance artist Andrew Armstrong of the band Monarchy. In another new act, this raven-tressed Glamonatrix will titillate as a big cat tamer in an erotic twist on vintage circus chic, wielding a crystallized whip while wearing a sparkling Hussar style suit (decorated with well-earned jeweled medals for excellence in striptease, of course!) Fans can also look forward to a thrilling update of her famous martini glass performed with an ensemble cast. Dita will be joined by the most revered performers in burlesque debuting exciting new acts for this tour, including Dirty Martini and Australian star Zelia Rose.

The Glamonatrix tour follows Von Teese’s “The Art of the Teese” which is the most successful burlesque tour of all time, playing to sold out theaters in cities across the United States, Canada, Europe, and Australia. “The Art of the Teese” was a triumphant introduction of Dita’s full-length revue to Europe, with audiences clamoring to get tickets. This sensational tour sold out five nights at The London Palladium, graced the stages of opulent historic theaters, with even the Royals in attendance at the Opera Garnier in Monaco. 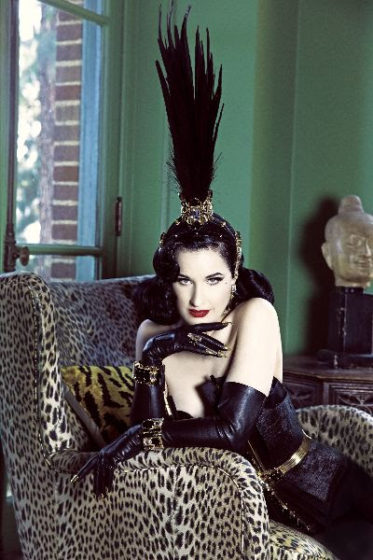 “With the success of my last tour of Europe, I came home more inspired than ever and got straight into building new acts. I am coming back with an even bigger show than I’ve ever toured with before. Being in these historic theaters with audiences coming dressed to the nines, creates this incredible atmosphere unlike anything I’ve ever seen before. For me, burlesque has always been about finding my own power and confidence, embracing sensuality and encouraging others to do the same in their own lives. Glamour is the art of creating mystery and allure, and the new “Glamonatrix” show embraces all of these qualities,” says Von Teese.

She continues, “I feel so fortunate that burlesque has come to symbolize a celebration of beauty and sensuality in many forms, a place where unlikely icons take the stage and inspire others. I’m proud to be a part of the modern burlesque movement and I’m grateful to have the chance to tour with performers that change people’s minds about striptease.”

The Glamonatrix show is a full evening of comedy and sophisticated striptease that celebrates diverse beauty. Far from being a typical burlesque show, Dita elevates and modernizes the classic 1940’s variety show, with both male and female forms glorified in a body-positive way that inspires and uplifts.

Always ahead of the curve, Dita’s casting has consistently been inclusive, diverse, and multi-faceted, showcasing the talents of male, female, and gender-fluid performers from around the world to create a body-positive, celebratory show like no other.

As the consummate performer in modern burlesque, Von Teese’s exhilarating live shows are world-renowned and draw fans from every corner of the globe. With over a million tickets sold, and an unprecedented quality of production in burlesque, it is clear why Von Teese’s self-produced tours are the gold standard of the modern burlesque revival, with devoted fans that include A-list celebrities.

“With a fan club that includes Marc Jacobs, Elton John, and Christian Louboutin, Dita Von Teese is giving burlesque a sweetly seductive second life, and more than a touch of class.” – Vanity Fair

“Dita has raised burlesque to the rank of a chic, glamorous and popular art, she is the most Parisian of all the Americans. Watching her show I felt that she undresses just to be better dressed. It’s like fireworks of creativity and crystals! It’s a must see.” – Jean Paul Gaultier

“Dita Von Teese is the undisputed Queen of Burlesque. Her shows epitomize Glamour, beauty, and elegance. The colors the panache, the otherworldly visual of her performance is unparalleled! She is a global phenomenon, the ultimate in style entertainment! I loved it!” -Philip Treacy

“The past lives in the present….magical!” -Steven Spielberg