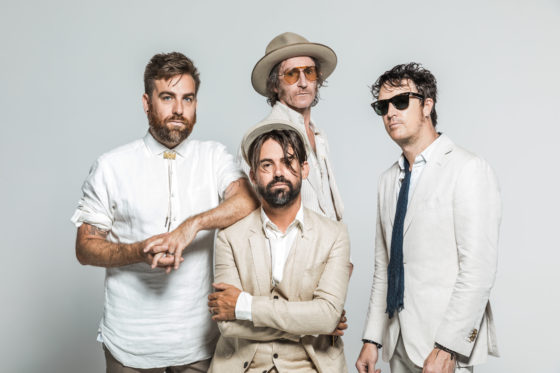 It’s one of the most successful Beatles events ever staged in Australia. Following two sold-out tours, in 2009 and 2014, Chris Cheney (The Living End), Phil Jamieson (Grinspoon), Tim Rogers (You Am I), and ARIA Award-winning solo artist Josh Pyke are reuniting for a special 2018 tour to celebrate the 50th anniversary of The Beatles’ White Album.

Chris, Phil, Josh and Tim will perform the White Album from start to finish – with a few surprises along the way – playing at some of Australia’s finest venues. They are backed by a 17-piece rock orchestra, led by musical director Rex Goh, with guitars, strings, horns and two drummers.

“I come from a three-piece band, that’s what I’ve done since high school, so it’s such a thrill to be on stage with so many people,” says Chris, The Living End’s singer and guitarist. “The great thing about The White Album Concert is it’s a big, powerful rock show. Even though it’s at venues like the Opera House, it’s not tame. The band really belts it out. It’s incredible to be standing in front of that force.”

Released on November 22, 1968, The Beatles’ self-titled ninth studio album became known as the White Album due to its distinctive plain white cover. It spent 16 weeks at number one in Australia.

Opening with Paul’s ‘Back In The U.S.S.R’ and concluding with ‘Good Night’, sung by Ringo, the 30-song White Album features classics such as ‘Helter Skelter’, ‘While My Guitar Gently Weeps’, ‘Blackbird’, ‘Why Don’t We Do It In The Road?’, ‘Glass Onion’, ‘Birthday’ and ‘Revolution 1’.

Chris, Phil, Josh and Tim stress that they’re not imitating John, Paul, George and Ringo. This is a celebration, not a tribute band.

“We’re bringing what we do in our own bands and our own careers to the show,” Chris explains. “This is not us pretending to be The Beatles.”

“We’re aware there are people who covet The Beatles’ records and their legacy so dearly,” Tim continues. “And we want to pay respect to that, but almost tickle it a little bit, or prick it a little bit, because we’re not a tribute act and we have no desire to do that. So we want to reinterpret it but not be disrespectful. But then also thinking that rock ’n’ roll is about being disrespectful.”

“In a respectful way,” Josh adds. “None of us does the songs exactly the way The Beatles did them, because then it would be like a pastiche rather than a homage. It’s a completely different mindset to get into someone else’s songs and, like Tim said, show the songs the respect they deserve; not just cover a song but really put yourself into it.”

The White Album – which followed The Beatles’ venture to India and the death of their manager, Brian Epstein – is one of the 10 greatest albums of all time, according to Rolling Stone. The magazine’s founder and publisher, Jann Wenner, called it “the history and synthesis of Western music”.

“It’s such a diverse record,” Josh says. “And it was kind of an experimental record for them at the time. It’s hard to sum it up and I think that’s the beauty of the record and why so many people love it. It is hard to put it in a box.”

“Musically and lyrically it’s iconoclastic,” Tim says, while Phil dismisses any suggestions that it would have been better as a single record instead of a double album. “Far out, I love the body of work, it’s incredible! I don’t know how you could change it.”

Chris, Phil, Josh and Tim are doing something The Beatles never did – the Fab Four never performed the White Album live. “That’s the other cool thing about this project,” Chris says. “You can’t go on YouTube and look up The Beatles playing anything off the White Album because they just didn’t.”

“When we first did it, we didn’t know what it would be, or how it would work,” Phil says. “It was an incredibly nerve-racking experience, because it’s a mammoth record and the material is so diverse. But we made it work. People really enjoyed it, and we got such a kick out of it.

“We’re excited to be doing it again.”

CHRIS CHENEY is the lead singer and guitarist in The Living End, who have had eight Top 10 albums (including two number ones), 12 Top 40 singles, and won six ARIA Awards. Fun fact: Chris has met a Beatle – he met Ringo at a party in LA.

PHIL JAMIESON is the frontman of Grinspoon, who have released seven studio albums – all of which have made the Top 10 – and won two ARIA Awards. He also starred as St Jimmy in the Australian production of the Broadway musical American Idiot. Fun fact: Phil’s wife, Julie, walked down the aisle to the White Album’s ‘I Will’.

JOSH PYKE is a Sydney singer-songwriter, who has won four ARIA Awards and had five Top 10 albums. He has also had his own beer, “The Summer”, with Sydney brewery Young Henrys. Fun fact: Josh’s favourite line on the White Album is “In a couple of years” from ‘Ob-La-Di, Ob-La-Da’. “I just think that’s great.”

TIM ROGERS is the frontman of You Am I, who have released 10 studio albums, won 10 ARIA Awards, and had three number one albums. He has also released six solo albums and an acclaimed memoir, Detours, in which he is described as a flamboyant flâneur, a raconteur, a romantic, and a raffish ne’er-do-well. Fun fact: Tim had a babysitter who would play ‘Revolution 9’ when young Tim was trying to go to sleep. “That song has always haunted me.”