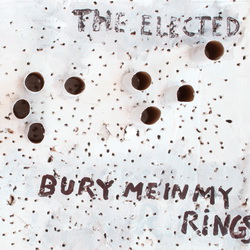 “Babyface”; listen to it! If you only have to listen to one song off the album I would recommend this one (the second track), although you would be doing yourself an injustice to only stop here.

It is funky, with just the right amount of fresh indie vibes, catchy instrumentals and captivating combination of male and female vocals (especially the amazing falsetto on the chorus). Babyface definitely is one of the more poppy tracks on the album and certainly is a successful little number.

A rather attractive quality of Bury Me In My Rings is the combination of styles that are incorporated rather successfully, and certainly there are parts you wouldn’t expect to work together, but they somehow do. It certainly is a great sounding mystery. The album for me is torn between indie pop styles, catchy lyrics and even more contagious beats, to a unique Hawaiian vibe with a ukulele and seductive yet relaxing female vocals on tracks such as “Trip round the world” –which transports the listener to the 1940s in a Casablanca-style gin joint that just oozes sexy jazz. Another style on the album that is present is the slight country swagger that can’t help but shine in “Go for the throat” and “Jailbird”, a moment stealer for me.

I love that The Elected have truly explored a wide range of styles, instruments and techniques to produce their third album Bury Me In My Rings, that is a refreshing change to typical linear albums that the listener can’t help but get bored of the same old style. This album definitely is adventurous and mesmerizing and I highly recommend for the indie rock fans who want something different that still stays true to its unique qualities, and The Elected certainly have delivered.