END_OF_DOCUMENT_TOKEN_TO_BE_REPLACED

1934, Born on this day, blues guitarist Freddie King. Eric Clapton covered his ‘Have You Ever Loved A Woman’ on the ‘Layla’ album. Died on 28th December 1976 of heart trouble and Ulcers aged 42
1955, Born on ths day, Stephen Phillip Jones in Shepherds Bush, London. rock guitarist, singer, guitarist for punk rock band Sex Pistols.
1964, during a US tour The Beatles played two shows at the Indiana State Fair in Indianapolis. They were paid $85,000 for the shows, tickets cost $4.00.
1966, Donovan hits #1 with “Sunshine Superman”
1970, Bill Halley and Comets reject $30,000 for 15 date tour of Australia
1972, ‘Mama Weer All Crazee Now’ by English glam rock band Slade hit number 1 on the UK top ten singles. 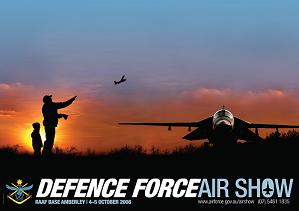 The 2008 Australian Defence Force Air Show, to be conducted on Saturday the 4th and Sunday the 5th of October will be the largest and most exciting Air Show conducted by the ADF.

This year’s Air Show will include aircraft from the United States Air Force, the Republic of Singapore Air Force as well as representation from across the Australian Defence Force.

The F-111, based at RAAF Amberley will star, performing its dump and burn display. The Roulettes, the Air Force aerobatic team, the Red Beret Army parachute team and the Navy Squirrel Team will also perform on both days of the Air Show.

A host of ground displays will also showcase career opportunities and capabilities within the Australian Defence Force.

A packed program of air displays will include participation from war birds from past conflicts and professional aerobatic displays.

Full information about the Air Show is available at www.airforce.gov.au/airshow

1653, Born on this day, Johann Pachelbel, composer, in Nuremberg
1947, Born on this day, Barry Gibb, singer, songwriter, producer, The Bee Gees
1956, Elvis Presley shared his success with his family by purchasing his mother a pink Cadillac.
1967, Boz Scaggs joined the Steve Miller Band.