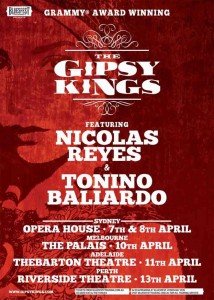 The Gipsy Kings are returning to Australia after five long years – on their 25th anniversary tour – an incredible band and still at the top of their game. They have bought us hits such as ‘Djobi Djoba’, ‘Baila Me’, ‘Bamboléo’, ‘Bem Bem Maria’, ‘Volare’, ‘Tu Quieres Volver’,‘A Mi Manera (Comme D’Habitude)’,‘Vamos A Bailar’ and many more.

Melding deep-heated flamenco, rumba, salsa and pop to the tune of 25 million albums sold, the Grammy Award-winning hit-makers behind ‘Bamboléo’ celebrate their 25th anniversary in their very own, blistering tradition – taking audiences back to the south of France on a ride through party-start guitars and booming Spanish vocals on their third tour of Australia in almost three decades of performing.
END_OF_DOCUMENT_TOKEN_TO_BE_REPLACED

Announcement #3 features a strong dose of Blues and Roots and so much more, with an exceptional blend of genres and a selection of artists from around the globe. Artists already announced for the Easter Extravaganza include the first major global performance of the Ben Harper & The Innocent Criminals reunion, The Black Keys, Zac Brown Band, Alabama Shakes, Paolo Nutini, David Gray and Ben Howard just to name a few.
END_OF_DOCUMENT_TOKEN_TO_BE_REPLACED