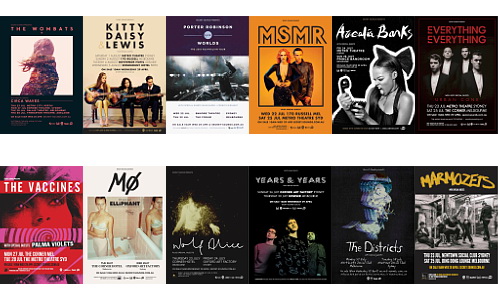 THE WOMBATS
WITH SPECIAL GUESTS CIRCA WAVES *EXC PERTH
Presented By: JJJ / The Music / Channel [V] / Spotify
The Wombats made their Splendour debut in 2008 with songs from their killer debut album ‘A Guide to Love, Loss & Desperation’. They return in 2015 with their third album ‘Glitterbug’, a triple j feature album that debuted at #2 on the ARIA charts, featuring the singles ‘Greek Tragedy’, ‘Give Me A Try, and lead track ‘Your Body Is A Weapon’.
Previous album ‘This Modern Glitch’ with its hit singles ‘Tokyo’ (Vampires and Wolves) and ‘Jump Into The Fog’ saw The Wombats build on the initial success of their debut album as it also reached #2 on the ARIA album chart and achieving platinum sales.
They will be joined by fellow Liverpool four-piece Circa Waves, whose infectious latest single ‘T-Shirt Weather’ has become an anthem for lovers-of-Summer the world over.
Hot on the heels of the release of their highly anticipated debut LP “Young Chasers”, which debuted at #7 on the British charts, the boys will bring a hit-after-hit setlist including ‘T-Shirt Weather’, triple j’s current spin ‘Fossils’ and festival favourites ‘So Long’, ‘Get Away’, ‘Stuck in My Teeth’ and ‘Young Chasers’.

MS MR
Presented by: JJJ / Channel [V] / Spotify / Pages Digital
Critically acclaimed music duo MS MR (Lizzy Plapinger and Max Hershenow) are heading back our way for Splendour 2015. It’s only been a few weeks since they dropped “Painted,” the brand new single from their highly anticipated forthcoming album, set for release in July!
The band first performed a handful of new tracks to rave reviews at this year’s SXSW Music Festival, leading Billboard to exclaim, “The duo displayed a shimmery new sound that blends disco and even hip-hop flourishes, which the crowd ate up, singing along.” In addition to their headline shows around the US, MS MR will also perform at this year’s Lollapalooza festivals in Chicago and Berlin as well as Osheaga Festival in Montreal.

MS MR’s widely praised debut album, 2013’s Secondhand Rapture, hit #2 on Billboard’s Heatseekers Album chart and spawned the alternative radio hit “Hurricane,” which spent nearly 30 weeks on the chart and broke into the Top 10. Revered by press from The New York Times to VOGUE, Pitchfork to USA Today, the band has spent much of the last two years touring the globe, joining fellow musicians Marina And The Diamonds, Bastille, Jessie Ware and Grouplove on the road, in addition to playing major festivals including Coachella, Bonnaroo, Austin City Limits, Outside Lands and Glastonbury.

THE VACCINES
WITH SPECIAL GUESTS PALMA VIOLETS
Presented by: Tone Deaf / The Music / Spotify
The Vaccines released their debut album WHAT DID YOU EXPECT OF THE VACCINES? in 2011 and the follow up COME OF AGE, reached number one in the UK album charts on release in 2012.
Having recently returned from a run of shows at this year’s SXSW Festival in Austin, Texas, the band are currently in the middle of a sold-out UK tour playing exclusive and intimate shows.
The indie rockers will release their third album, ENGLISH GRAFFITI on May 22… So you have plenty of time to learn their new lyrics before they arrive!
They will be joined by UK buzz band, Palma Violets, who two years on from the release of their debut, top 10 UK charting album ‘180’, which NME declared to be ‘the new soundtrack to your life’ and Q Magazine ‘one of the best debut albums of the decade’’, have just announced the full details of their highly anticipated follow-up. Still all in their early twenties, Palma Violets have developed into first class songwriters and honed their own unique sound.

YEARS & YEARS
Presented by: Channel [V] / The Brag / Beat / Spotify / Pages Digital
Having initially grabbed the attention of key tastemakers with their debut, Years & Years quickly cemented their status as a sure–fire act to watch with follow up singles ‘Take Shelter’ and more recently the chart bothering ‘Desire’ and UK #1 ‘Kings’. The videos for these singles have received a staggering 8.8 million views combined.
The tail end of 2014 saw the stars align even more for Years & Years. Off the back of support slots for Clean Bandit and Sam Smith, a performance on ‘Later With Jools’ and their Radio 1 A Listed latest single, they were shortlisted for the much coveted Brits Critics Choice Award and named on the BBC Sound Poll for 2015.
Years and Years join us following shows in Europe and New York and their first ever UK headline tour, which completely sold out three months in advance.

WOLF ALICE
Presented by: JJJ / Tone Deaf / The Brag / Beat / Spotify
London’s Wolf Alice enjoyed a breakthrough 2014 after releasing their EP CREATURE SONGS, which featured the critically proclaimed hit ‘Moaning Lisa Smile’. Since then the band has appeared on the prestigious BBC Sound of 2015 long list, became the #4 most blogged-about artist of 2014 on UK Hype Machine, won Best Breakthrough Artists at the UK Festival Awards and have been touted by the likes of NME, iTunes and Hype Machine as a band to watch.

Their debut album MY LOVE IS COOL, was produced by Mike Crossey (Arctic Monkeys, Foals, Black Keys), featuring new single ‘Giant Peach’ (currently in rotation at triple j) and drops June 19 – just in time for Splendour.
With a touring schedule that takes in Reading & Leeds Festival, Longitude and Summer Sonic, we’re super stoked these guys are heading our way for their first headlining dates in Australia.

THE DISTRICTS
Presented by: Music Feeds / Spotify / The Music
The Districts exist in the moment, a captivating voice in contemporary rock, a band crafting heartfelt music that’s honest, raw, energetic and unforgettable whether they’re tearing it up in a basement or rocking a festival crowd.

The Pennsylvania four-piece self-recorded and self-released their ‘Kitchen Songs EP’ in 2012, followed that summer by their full-length debut ‘Telephone’ and by their senior year, the band were performing regularly in Philadelphia, Delaware and New York.
Fast-forward to today and The Districts are enjoying critical acclaim for their second LP, ‘A Flourish and a Spoil’ and have taken their live show to an envious list of international festivals including SXSW, Lollapalooza, Austin City Limits, Reading/ Leeds, Outside Lands, Haldern Pop Festival.
4th and Roebling

All tickets on sale 10am local time, Wednesday April 29
Exclusive presale available to Secret Sounds subscribers
Get on the list at secret-sounds.com.au or facebook.com/secretsoundstouring

Visit secret-sounds.com.au for all sideshow details and updates