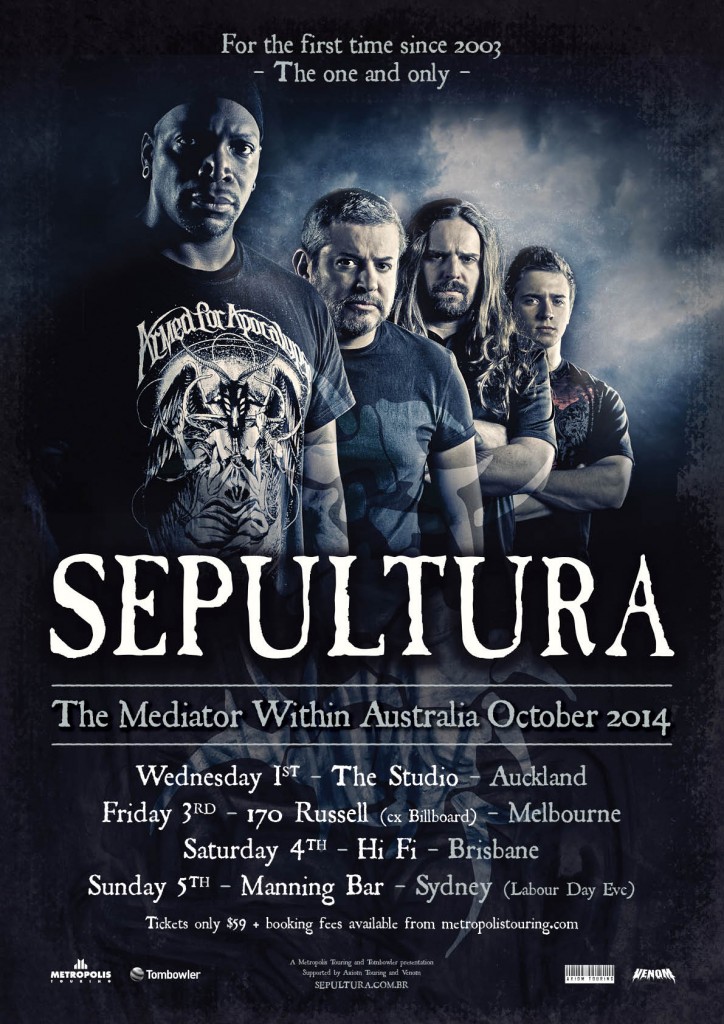 It was the city of Belo Horizonte, Brazil that launched the ascent of their native sons in SEPULTURA (Portuguese for “grave”) in 1983 with a trajectory unsuspectingly aimed at the worldwide metal music scene. A band with humble economic beginnings whose musical identity was forged in the context of living through Brazil’s authoritarian military dictatorship, SEPULTURA would go on to become Brazilian ambassadors to the metal world, revered master architects of the death/thrash genre, and the most successful and influential heavy metal band from the Federal Republic of Brazil.

When SEPULTURA experienced a line-up change in the mid-1990s that was widely covered by the metal press around the world, remaining members recruited American Derrick Green in 1997 to front the band, a position the Cleveland, Ohio native has held for the past fifteen years and counting.

‘Sepultura proved once again that they are in an excellent form nowadays!’ – Metal Rage

Fast forward to 2013 and SEPULTURA released one of the most deadly and critically acclaimed albums ‘The Mediator Between The Head And Hands Must Be The Heart’ and despite having experienced enough lineup changes and genre alterations to keep fans on their toes, the band’s longevity is also cemented by the blistering live performances that have remained a constant threat to all contemporaries.

2014 is a year to remember. It marks not only three decades of the mighty SEPULTURA’s solid career, throned among the best of the best, but also the sole, undisputed leaders of Brazilian metal’s long overdue return to Australia, 11 years later!

‘The spirit of Sepultura is very much alive and well!’ – This Is Not A Scene.com

SEPULTURA’s forward-thinking progression keeps it far from the grave it’s named after. Celebrating their “Roots, Bloody Roots” by combining tribal cues with thrash, death metal, punk and hardcore elements/influences, there is no doubt that the ever-evolving pioneers keep it fresh – from humble thrash and classic rock, to nu-metal grooves and their post-Against experimental rebirth.

Members of the Australian SEPULTRIBE best be ready for a chaotic show packed with an extensive stretch of classics, including the likes of Refuse/Resist, Arise, Territory, and Attitude. With the South American phenom well and ready to bring a heavy metal hurricane to to their SEPULNATION down under, you will not want to miss what is sure to be a hell of a time!

The Mediator Within Australia and New Zealand October 2014