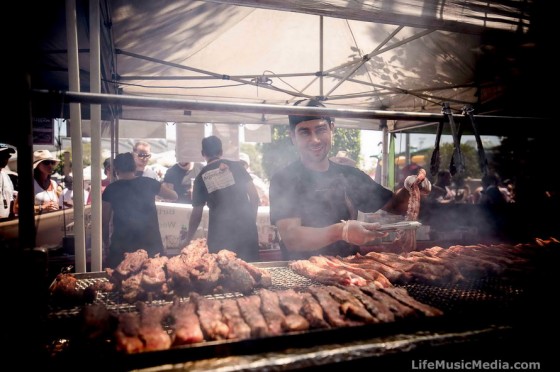 Hair, heat and hunger were the flavour of the weekend at the inaugural Meatstock held at Sydney showgrounds on the 13th and 14th of February 2016. Capitalising on the increasing worldwide trend of BBQ’s and the art of grilling, Meatfest incorporated all the best that a carnivore could want, BBQ’s, beards, butchers, barbers, beers and bands. Too put it simple what more could a fella want for his Valentine’s weekend?

From the moment you walked into the showground the aroma coming from the BBQ’s could turn the harshest of vegetarians into a fully-fledged meat lover.

In other areas of the festival the blade was definitely facing extinction. Appearing on the Meatstock stage were The Beards, The Adam Eckersley Band, Henry Wagons, Mustered Courage, The Davidson Brothers. Each artist in turn left a clean face with severe beard envy. The music itself was diverse, from bluegrass to rock with bands playing well into both nights. Obvious crowd favourites Sydney band The Snowdroppers lead from the front with charismatic singer Johnny Wishbone using the sold out crowd as backing vocals to an impromptu meat themed song. North Coast female duo The Hussy Hicks entertained the Sunday afternoon crowd with their unique blue roots sound, defiantly ones to look out for.

Music was one of a plethora of events held over the weekend. Barbers and butchers were at war. The crowd enjoyed several heats throughout the weekend of these skilled trades’ people. Both disciplines got to show off their skills with their tools of the trade. It was pleasing to see Diana Edwards from Castlecrag Meats rise to victory over the boys. Fabio was the winner with the scissors.

BBQs and butchers go hand in hand. There were many displays of BBQs, smokers, Weber kettles new and old grillers right up to the downright ridiculous. If the punters were in the market for a BBQ when you got to Meatstock you sure left with a taste for one. Many an opportunity to taste test and watch the masters who make a lifestyle out of the BBQ. The guys from Weber were the clear winners when it came to sampling, made me go home and fire up my own.

Overall a true success for a first time festival. Sure, there were some teething problems but there were many positives as well. Leaving the showground to the fading sounds of music and the aroma of meat I look forward to next year. Well done to the organisers and the 10,000 plus crowd who attended this unique event.