Click here to buy your tickets!
Sleepy, seaside fishing village gets its loudest wakeup call yet as Pikelet helps launch the first of the line up and some exciting new developments for the 14th annual Queenscliff Music Festival.

The first round of artists for this year’s Queenscliff Music Festival have been revealed as well as a number of exciting, new announcements at a special launch event on Tuesday 10th August, held at Melbourne’s Transit Lounge, where the incomparable girl-with-the-loop-pedal, Evelyn Morris aka.Pikelet, dangled the musical carrot with a Festival preview performance.The 2010 festival line up when completed will deliver over 80 acts presenting 150 performances in 13 venues across Queenscliff on the weekend of 26-27-28 November.

Direct from 3 years of staging large scale concerts in Macau and 10 years at the USA’s Telluride Blues and Brews Festival, New Festival Director, Michael Carrucan, has added a new stage called The Crossing Stage, and ensured everything kicks off on an ultra high note with The Lighthouse Stage opening a day earlier to encompass the Friday night.

In an epic summer weekend event that engulfs the whole of the town, Queenscliff Music Festival famously encompasses all types of music – blues, roots, rock, pop, soul/groove, classical, jazz, country, folk, world/reggae and acoustic – accommodating the tastes of young, old and everything in-between, in unexpected venues. This year’s Festival will be no exception with a line up which includes the following artists and shows:

As usual, one of the highlights of this year’s 14th Queenscliff Music Festival is sure to be the QMF Express – the festival-on-a-train, departing from the grounds every hour with four artists performing in four different carriages. Enjoy a great, chilled-out experience as you travel up and down the coast of the peninsula to live tunes.

Whether you are enjoying some great music on the QMF Express, sipping on a bevvy at The Crossing Stage, watching the sun set over The Lighthouse Stage or saying ‘hi’ to the presenters in the Triple R tent, the ambience of this Festival will make the world feel like your oyster. When you’ve had enough of the music, you can always cruise down Hesse Street and wander through the markets or fill rumbling tummies at the many food stores designed to feed the soul as well as your hunger cravings.

Queenscliff Music Festival is a great excuse to pack your bags for the weekend – or just plan a day trip – for a festival experience in a historic, beachside town with unique performances spaces and a tremendous wall of eclectic sound.

Click here to buy your tickets from Moshtix!
When:
26th, 27th and 28th of November 2010.
Full Details at Queenscliff Music Festival

Second wave of announcements will happen in the seconds week of September. 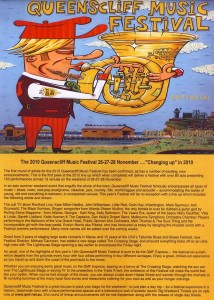 About Queenscliff and Queenscliff Music Festival
The historic seaside village of Queenscliff on Victoria’s Bellarine Peninsula has wonderful Victorian-era architecture, lighthouses, a huge military fort and modest fishermen’s cottages. They collectively represent its colourful past.

Queenscliff began as a fishing village and in the late-1800s became a fashionable holiday destination for Melbourne’s elite who chose to travel down the bay aboard paddle steamers. The region’s farming and maritime heritage remain strong — and local wines and produce will be on offer at the festival as well as Peninsula access via the Portsea Ferry. Many yachties will take advantage of the towns swish new ‘Bo-Tel” at the Queenscliff Marina.

For the past 14 years, Queenscliff has also been the venue for the annual music festival. This festival offers an eclectic mix of mainly Australian artists, but does feature special international guests. It all started as a means of encouraging tourism and now visitors and tourists go back to the family-friendly event each year.
Held in the last weekend of November, the festival is extremely popular because of its depth and diversity of musical talent – and the location certainly goes towards making it the perfect venue, with sweeping views of Swan Bay.

Two colourful circus marquees are the primary stages, and the Bellarine historic steam train provides a venue with a difference. There are many smaller venues up the town’s main drag, Hesse Street including churches and a grand Victorian Ballroom. Music lovers drift along the street enjoying the outdoor music, eateries, galleries and food stalls which operate all weekend.

It’s all about good music, food and wine, but children haven’t been forgotten. Kids Klub is sure to captivate and inspire them.

About Pikelet and Evelyn Morris
Evelyn Morris has come a long way since 2006, when Pikelet sprang to life, named in tribute to the small pancakes her mother used to whip up when money was scarce.

Before Pikelet, Evelyn was a hardcore kid, a drummer with serious chops in various local bands such as Baseball and True Radical Miracle. Something must have switched in Evelyn’s mind, though, because her debut album Pikelet was decidedly un-hardcore, made mostly with an accordion, a floor tom and a loop pedal. It came out in 2007 to rave reviews, Pitchfork write-ups and community radio high rotation.

Evelyn promptly took off around the world, touring the UK and Europe with Darren Hanlon, and returned home in hot demand, invited to play festivals such as Golden Plains and Laneway, and open for the likes of Sufjan Stevens, Beirut and Goldfrapp.

After a while, the girl-with-loop-pedal format began to feel a little lonely, so in late 2008 Evelyn assembled the handsome Pikelet band, featuring Matthew Cox (Witch Hats) on drums, Shags Chamberlain (Smallgoods) on synths and Tarquin Manek (Bum Creek) on bass and clarinet.

Either solo or as a dynamic fourpiece, Pikelet continued to tour Australia with overseas cult heroes such as Mount Eerie, Lucky Dragons, and Ruby Suns, as well as playing a headlining show at the Melbourne International Arts Festival. Not only that, she then set off on a four month solo world odyssey in mid-2009, playing everywhere from L.A. to Latvia with acts including Jens Lekman, Sarah Blasko, Jeffrey Lewis and Tiny Vipers.

Somewhere amidst all this, Pikelet the band found time to make second album Stem. Recorded with Chicago expat producer Casey Rice (Tortoise, Sea And Cake, Liz Phair, Ben Lee), Stem is an incredible expansion of vision. The live band brings a cosmic space-prog edge that infiltrates Evelyn’s wide-eyed style with mind-expanding results.
The album emerged in early 2010 to sumptuous reviews and Albums of the Week on community radio around the nation. Pikelet took off around the nation launching the album, and also fitted in shows with Devendra Banhart, Dirty Projectors and Kaki King.

After all this, it seems the sky is the limit for Pikelet, but actually that’s not quite right. As Stem proves, not even outer space can contain Evelyn Morris!