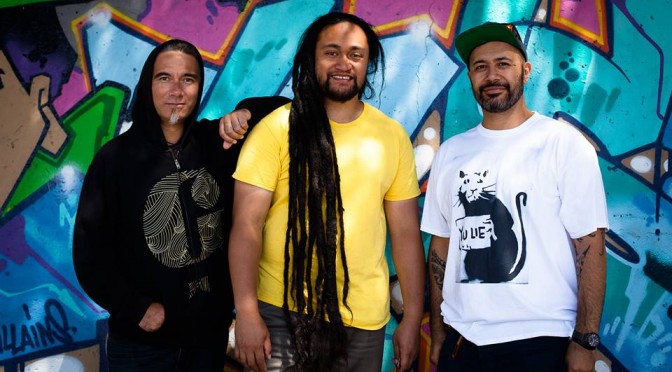 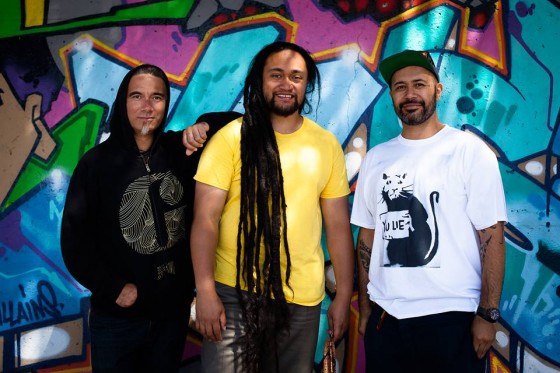 After the successful Australian release of their single ‘Haiku’ in 2014 Trinity Roots are heading to Australia for a string of tour dates in support of their heavily anticipated third studio album. Drummer Ben Wood took time our for LifeMusicMedia…

John Mclaughlin’s “Extrapolation” really pulled Jazz in to focus for me when I was about 19. My guitar teacher at the time was a big John Mclaughlin fan and he introduced me to this album but it was actually Tony Oxley’s drumming on this song/album that flipped my thinking about music at that point in my life and helped me to interpret other expressionists like Elvin Jones and Tony Williams.

I can’t say that I have a single favourite Album but currently I’m listening to the album Emmaar by Tuareg band Tinariwen and loving it!

Aldous Harding from Lyttelton, NZ. She’s a great song writer/vocalist a with a killer sense of humour on stage.

I can’t live without a small amount of peaceful time each day away from conversations, stimulus, and noise. Sometimes the long-haul stretches on the road allow for a semi-adequate substitute.

I think of the movie Samson and Delilah directed by Warwick Thornton. It’s one of those beautifully shot but gut wrenching depictions of life in the Outback for displaced Australian Aboriginals. Wake in Fright directed by Ted Kotcheff is also a pretty unique watch but maybe slightly too twisted to watch after christmas dinner.

When influential artists treat it as an avenue to make money whilst promoting values and ideas that are harmful to impressionable minds.

is that more and more there are different ways for people to release and promote their Art without having to grapple with contracts and needing financial backing from big labels. DIY is the new DI why not.

Musically: Jimi Hendrix or Miles Davis, defo one of those guys.
Otherwise: A tie between the rays of the Sun and the pull of the Moon.

an explorer of the universe and beyond

My most recent album purchase is of a Thai band called Khun Narin’s Electric Phin Band. I was introduced to Khun Narin via a Youtube clip of the band playing in what looks like a rural village market place. The music consists of long instrumental pieces with a Joyously Pentatonic and Psychedelic sound and bold spontaneous energy not dissimilar to Hendrix Band of Gypsys and a hint of Vieux Farka Toure.

I was 9 years old and I bought this cassette tape at the Warehouse that was called something like Rhythm Volume 5 or 7 or something… it had Color Me Badd’s “I Wanna Sex You Up” and Roxette’s “She’s Got the Look” on it… delightfully cringey.

Dire Straits in Wellington at Athletic Park. The concert was back in 1991 and I feel like I can actually remember certain aspects of Mark Knopfler’s guitar tone in “Money for Nothing”.

the last concert I actually attended without being a part of was in Glasgow, Scotland back in January. Trinity was over there for Celtic Connections and during one of our nights off we checked out another Kiwi artist Maisey Rika. She was singing her beautiful dreamy waiata with support from a solid group of instrumentalists and other vocalists. It was a seated audience in this big church right in the middle of the Glasgow CBD which made for a beautifully ethereal setting.

Party: Bowmore 12 Year Old Single Malt Whisky. Neat. I tried the 18 the other day but it was a totally different experience and maybe a little bit too spicy without the peatiness of the 12.

the Antiques Roadshow section of www.bbc.co.uk. Either that or drummerworld.com, but yeah much of a muchness really.

watching Tim and Eric on Youtube however I wouldn’t recommend this for children under the age of 35.

Crumbled Blue Cheese over thinly sliced ripe Pear sitting on a Portobello Mushroom (grilled so the cheese makes for a molten melty mouthwatering madness)… either that or Burger Rings.

“Don’t have your knees at any angle less than 90 degrees” this was advice given to me from a NZ Drumming Druid Chris O’Connore in respect to how you should be seated behind the drum kit to avoid knee problems.

Work with Bjork on a creative project somewhere in the vein of Sesame Street meets Holy Mountain.

Given: I found this amazing leather ladies purse in a vintage clothing shop on Portobello Road in London (go there! no really, go there!!! why aren’t you there already?). It has 3 or four different panels overall and each panel is a bright warm turquoise, yellow, pink or orange. As a gift to my girlfriend it definitely brought on a few smiles!

Received: A good mate of mine gave me a real decent quality Cast Iron Fying Pan for my birthday a few years back. So important in the kitchen! Never underestimate the value of a good Iron Frying Pan, they just hold the heat in so much better than the other metals :)