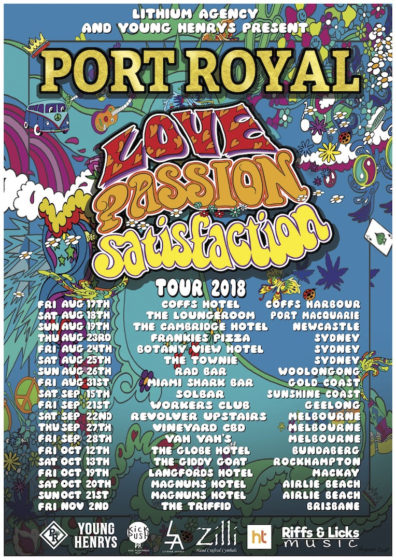 The boys have already put a stack of miles on the clock in the last week taking their tunes down the NSW coast, selling out merch AND rooms along the way!

After a show on the Sunshine Coast, they will return to the nations spiritual home of rock for a series of shows around Melbourne before working their way around Queensland in October before wrapping up the 20 date tour with a hometown show at The Triffid.

Port Royal proudly wear their vintage rock n roll influences on their tie dyed, flowing sleeves. In an era where everything old is new again, the quartet channel rocks forefathers and put them on display for a new generation to fall in love with.

The swing of the Stones, the riffage of Zeppelin and the psychedelica of latter day Beatles combine for a retro journey like no other. Sing alongs, good vibes and a feeling of innocence. Port Royal are the ultimate escape from modernity, back to a time where it really was all about the songs.

Formed in 2015, they came out swinging with their first EP, The Express, in mid 2016 and hit the road playing with the likes of The Delta Riggs, Wolfmother and The Cherry Dolls and quickly built up a rep as a band to watch.

In 2017 they dropped the rocking Get Heavy. It’s Stooges like swagger saw it get voted in at #2 on 4ZZZ’s Hot 100 on New Years Day 2018 and the band toured the east coast again, gaining new fans at every show.

In April this year, Port Royal unleashed a belter in the form of Rock & Roll Is Dead. The track proves that rock is anything but dead. It’s loose, high octane retro goodness was the fuel for another east coast run that culminated in a sold out homecoming show!

Check out the killer, Vampire themed music video for the song.
www.youtube.com/watch?v=Ago3JOXr5aw

On August 10, Port Royal released their second EP, Love, Passion, Satisfaction. 5 tracks of potent, good time rock n roll that evoke the blues, basslines and hooks of rocks heyday while lyrically keeping it real with themes of equality and positivity.

The EP continues to get rave reviews and is turning up on retro playlists all over the place. Rock fans of all ages are fast becoming aware that there is this band out of Brisbane, delivering the tunes…

If you haven’t experienced a rock n roll show in a while, then don’t miss Port Royal next time they come through.