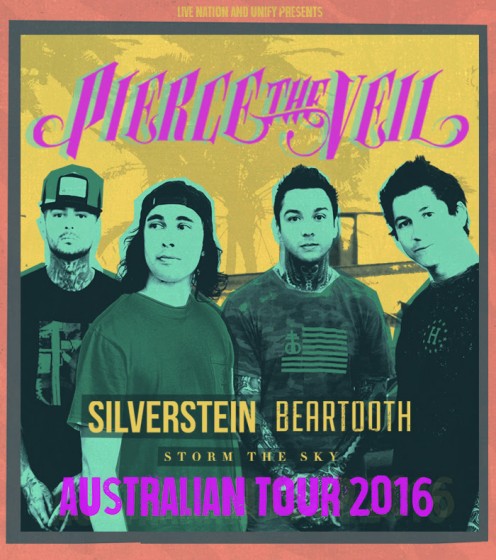 PIERCE THE VEIL, one of the fast rising and most electrifying rock bands on the music scene today, has announced their eagerly-awaited return to Australia to celebrate the release of their highly anticipated album, Misadventures.

The San Diego natives will tour nationally this August with special guests SILVERSTEIN, BEARTOOTH and STORM THE SKY joining them on all dates.

Tickets for all shows go on sale at 10am this Friday, May 20.

My Live Nation members can be among the first to secure tickets during the pre-sale commencing midday, this Wednesday, May 18.

Misadventures is the follow up album to PIERCE THE VEIL’s 2012 Collide With the Sky that has sold more than 400,000 copies worldwide and earned a Gold single for the track King For A Day.

New track Circles, inspired by the Paris terrorist attacks, was named the “Hottest Record in the World” on BBC Radio 1’s Annie Mac show and has already amassed more than 700,000 streams.

PIERCE THE VEIL has embarked on a journey turning a buzz into a roar, as 2016 builds to being their biggest year yet.

Joining PEIRCE THE VEIL is one of Canada’s finest post-hardcore bands, SILVERSTEIN. Their successful fifteen-year career manifests itself in the sounds of six full-length albums including the group’s 2003 debut, When Broken Is Easily Fixed, to countless EPs and singles. Some 1,760 shows and more than one million albums sold have yet to satiate the dynamic five piece, nor their eager listeners worldwide.

In the two short years since their debut album, BEARTOOTH has catapulted into heavy music’s stratosphere. The new album, Aggressive, features co-songwriting contribution from John Feldmann whose work as producer, mixer and co-writer includes albums by Good Charlotte, The Used and 5 Seconds Of Summer. With more than 10 million combined YouTube views, BEARTOOTH has trekked around the globe with Slipknot, Pierce The Veil, Bring Me The Horizon, Sleeping With Sirens, plus Download Festival, Reading/Leeds and Vans Warped Tour performances.

Melbourne-based rock band STORM THE SKY released debut record Permanence which debuted at #45 on the ARIA chart with Rolling Stone Australia declaring “Storm The Sky combine doomy head-banging and uplifting choruses in a genuinely thrilling way.” Since then, the band has been finessing their live show, clocking up the kilometres touring with Sleeping With Sirens, In Hearts Wake and Chiodos.

TICKETS ON SALE 10AM FRIDAY MAY 20

My Live Nation pre-sale:
12pm Wednesday May 18 until 5pm Thursday May 19