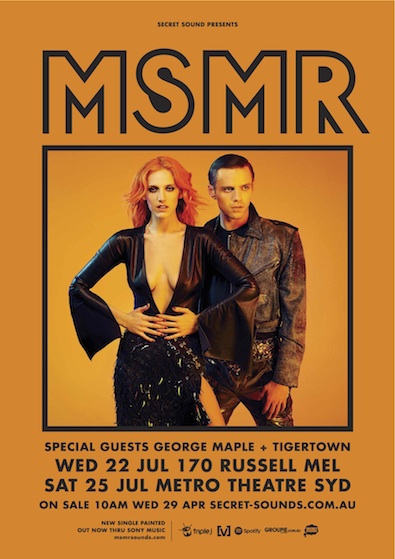 It’s only been a few weeks since they dropped “Painted,” the brand new single from their highly anticipated forthcoming album, set for release in July! The band first performed a handful of new tracks to rave reviews at this year’s SXSW Music Festival, leading Billboard to exclaim, “The duo displayed a shimmery new sound that blends disco and even hip-hop flourishes, which the crowd ate up, singing along.”

In addition to their headline shows around the US, MS MR will also perform at this year’s Lollapalooza festivals in both Chicago and Berlin as well as Osheaga Festival in Montreal. MS MR’s widely praised debut album, 2013’s Secondhand Rapture, hit #2 on Billboard’s Heatseekers Album chart and spawned the alternative radio hit “Hurricane,” which spent nearly 30 weeks on the chart and broke into the Top 10.

Revered by press from The New York Times to VOGUE, Pitchfork to USA Today, the band has spent much of the last two years touring the globe, joining fellow musicians Marina And The Diamonds, Bastille, Jessie Ware and Grouplove on the road, in addition to playing major festivals including Coachella, Bonnaroo, Austin City Limits, Outside Lands and Governors Ball.

Visit https://secret-sounds.com.au for all tour updates and ticketing.