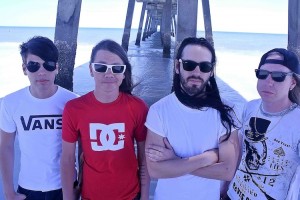 Earlier this year, Red Jumpsuit Apparatus introduced an interesting concept to their Australian fans: the Choose Your Own Adventure tour. They listed a series of dates, and possible locations where they could play on each of those dates, and let their fans vote for the location – but not just with a click of the mouse, the fans had to buy a ticket in order for their vote to count. So when doors opened to their Brisbane show, you could be sure that the audience packing the lower level of the Hi-Fi were genuine fans. After all, they bought a ticket before they could even guarantee that they would see the band play in their city.

Double Lined Minority, Set The Record, The Sweet Apes and Red Beard opened the show, with The Sweet Apes warming up the crowd with a curious cover of Taylor Swift’s We Are Never Getting Back Together. Red Beard also delighted fans, as frontman Tom Rooney stroked and tickled his long beard between songs. But it was clear that the crowd was there for only one reason, growing restless between the bands and chanting for RJA. Finally, the opening strains of Your Guardian Angel started emanating from the dark stage to the screams of the crowd. When lead vocalist Ronnie Winter emerged, wearing neon green sunglasses and a loose orange singlet, the crowd grew deafening.

At Winter’s signal, the long, sustained chords quickly switched to the faster Misery Loves its Company, a move which saw the audience start dancing for the first time in the evening. The band kept their set upbeat for most of the night, playing newer songs from their EP Et Tu Brute? while mixing in older, more popular songs from some of their older albums, including one of their first hits, Justify, which Winter introduced as “a song that’s pretty serious, not too comfortable… but I like it.”

As the set drew closer to the end, the band tantalized the audience with a stylized, extended introduction to Your Guardian Angel – one of the two most anticipated songs of the evening. The introduction stretched out, and developed, allowing different members of the band to showcase their fingerwork. Finally, when the audience was screaming for the song to start, Winter stopped the music, thanked the audience and promised to come visit again soon. At the audience’s demanding yells to play, he jumped quickly into the first verse of the song, the crowd singing along loudly enough to drown out his soft vocals. As the song wound down, the audience again began chanting for Face Down, the band’s most popular hit. To conclude the show, Winter called out, “Just remember. Jesus saves. And he loves you!”, before throwing all of his energy into the final song.

After the band humbly thanked the audience again, and then quietly exited, the feelings of the crowd could be summed up in the words of one of the girls next to me: “I only bought a ticket to hear that one song – and it was so worth it.”