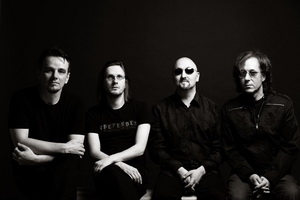 As Neil Young once sang, tonight’s the night – the big music has arrived in town. Along with fellow prog-rock fans, young and old, I walk to The Tivoli with a sense of excitement that only those who have a copy of Arriving Somewhere DVD can truly understand. Only two months ago, I was privy to witnessing Japan’s divine noise makers Mono, whose performance proved to be one of the most singularly powerful live experiences in my entire life, and just before that another crushing live unit –
Steven Wilson’s Swedish collaborators/protégés Opeth – yet this balmy evening also stores a whole array of spine-tingling moments for us.

The diverse crowd is still busy converging at the venue by the time newly-revamped Sleep Parade – who had earlier opened for tonight’s heroes during their inaugural Australian tour two ears ago – plug in and take all and sundry into a wide open sonic space. Oz-progsters to the core, the quartet unveil out one sprawling epic after another; Oxygen’s doomy arpeggio figure gives way to chunky riffing, while on the latest single Every Day and the propulsive drums-led Seconds Away the Melbournians very nearly better Karnivool at their own game. Frequently guitar-switching vocalist Leigh Davies is occasionally submerged in the dense instrumental mix, but nevertheless hits the requisite highs – in all, a strong performance in front of a healthy gathering that gives the band a warm Queensland welcome.

Having spent almost two years kicking myself for missing UK giants Porcupine Tree on their first-ever Down Under tour in 2008, I join the tsunami of cheers as the barefoot Steven Wilson leads his cohorts onstage and commences act one with an announcement that the band will play the first CD of last year’s masterful The Incident. As the shuddering distorted chords of Occam’s Razor segue into a scything Blind House, Danish artist Lasse Hoile’s exceptional-quality visuals start rolling on the screen and we leave the (blank) planet. Drummer Gavin Harrison and bassist Colin Edwin form a living, breathing engine room behind Wilson and longtime touring guitarist/backing vocalist John Wesley’s riff/solo onslaught and Richard Barbieri’s sublime synth soundscapes – “majestic musicianship” doesn’t seem fit to accurately describe it.

An intensely evocative, intelligent lyricist whose words take on a whole new level of meaning in a live environment and a guitarist of rare melodic power, Wilson sits at the piano for the two beautiful minutes of Kneel And Disconnect, then straps his guitar back on and leads the charge on the edgy Drawing The Line and the album’s alternately creepy/thunderous title number. Your Unpleasant Family again briefly soothes the air before the nostalgic, multi-part centre suite Time Flies – a stone-cold recent Porcupine Tree classic – stops a thousand-odd hearts in the room. Degree Zero Of Liberty revisits the album’s opening moments before another jaw-dropping sequence – Octane Twisted, The Séance and Circle Of Manias – is unleashed on our collective receptors; I Drive The Hearse’s fairytale-gone-wrong motif feels almost like a breather as it concludes act one.

Kicking off with the crowd-chanted ten-second countdown, the second half of the show is primarily devoted to the imperial “old stuff” – with a heavily-syncopated Start Of Something Beautiful from 2005’s Deadwing, the slow-burning Russia On Ice from 2000’s Lightbulb Sun being mere precursors to the following sonic tornado. Coming at us at a full force, the middle seven-plus minutes of Fear Of A Blank Planet’s mammoth centrepiece Anesthesize are positively devastating; there’s a brief moment of calm established by the beloved acoustic ballad Lazarus, which only makes the subsequent emotional storm of the immensely moving Way Out Of Here even more hard-hitting. Accompanied by Hoile’s striking “sad girl on the rail tracks” video, the song becomes a transcendental experience, Wesley soaring on the cathartic chorus and Wilson wringing the pain and sorrow from one of his many PRS guitars. The aching non-album Normal (from the Nil Recurring EP) adds another seven-minute of angst to our temporarily altered dimension and Bonnie The Cat (from The Incident’s disc two) sees the bespectacled genius venture into another galaxy with some extra-terrestrial guitar shrieks.

Ladies and gentlemen, we’re still floating in space by the time PT bow out with two chestnuts from 2002’s In Absentia – fan favourite The Sound Of Muzak, upon which Wilson introduces the band members (with a cheeky Down Under snippet accompanying the Melbourne-born Edwin), and the childhood-evoking Trains, the massed handclaps nearly drowning out the acoustic-strummed rhythm. “Always the summers are slipping away… when the evening reaches here, you’re tying me up, I’m dying of love – it’s OK”; words to live by and a fitting coda to the finest show of 2010 so far.