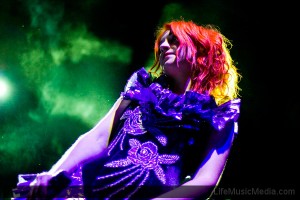 The mosh pit at the Enmore theatre was packed out from wall to wall before the support acts – had even left the stage, and the seats quickly filled up. As soon as Kate Miller-Heidke hit the stage, the excited hubbub exploded into a minute’s solid applause. She lived up to her usual image – with freshly dyed hair and a dress made out of purple frills and silver tinsel. And, as soon as she started playing, everyone in the house knew they were in for something special. The whole crowd fell dead silent to hear her open with “Our Song”, a honest and emotional performance that Kate starts over her partner Kier Nuttal’s guitar before the rest of the band comes in.

It’s not hard to tell why Kate Miller-Heidke’s been so successful with her second album, ‘Curiouser’ as she kicks it up a notch with “I Like You Better When You’re Not Around”. Despite slight keyboard issues, she’s hitting the mark right off the bat, full of confidence. Kate switches seamlessly from her softer emotional side into her operatic highs and mock-serious ballads, often within the same song. The band jumps and bobs their heads in unison; the laughs don’t just come from the anecdotes about bikini waxes and Kier being mistaken for Ben Folds. From an AC/DC into during the final sustained note of “Dreams”, to the Facebook-themed “Are You Fucking Kidding Me?”, Kate’s off-kilter sense of humour permeates the whole show.

The crowd gives a cheer every time they recognise a song – recent radio hit “Caught In The Crowd”, “Politics in Space” and most of all for her first platinum single “Last Day On Earth”. But an attempted sing-along doesn’t really take off – the audience is happy to let Kate sing and the band back her up. New bass player Nathan fit right in to the antics with an extended bass solo in “God’s Gift to Women”, and backup singer/ acoustic guitarist Nicole Brophy was as comfortable as she’s ever looked singing alongside such a talented lead.

The band leaves the stage for a softer interval with just Kate and Kier, and they played a remarkably well-adapted cover of “Walking On A Dream” as well as the unreleased “The Day After Christmas”. Then it’s back into the full band sound with an extended drum intro into “The One Thing I Know” and a jazzed-up “Little Adam”. The humour is back as Kate dedicates her last cover – “Toxic” – to Britney Spears, and the alignment of the stars that allowed for both of them to be touring in Australia at the same time gives everyone a bit of extra energy from what is a usually rocking song full of rich bass and acid guitar.

The multi-coloured paper lanterns that line the stage don’t go off when the band says goodbye, and, sure enough, it’s time for an encore – with Nicole and support act Megan Washington helping Kate out on the old classic “Caveman Days”, before the song the crowd has been waiting for comes out – lead “Curiouser” single “Can’t Shake It”. The crowd loves it, and the choreographed dance routine by Kate and Nicole comes off perfectly – a fitting end to the show of an artist who is all about the unexpected, as the album title may lead you to expect. The show definitely lived up to the hype – a solid and confident performance from a rising star who is definitely on the way up.