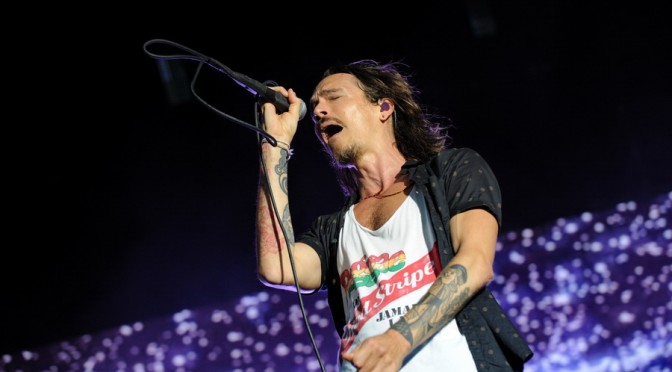 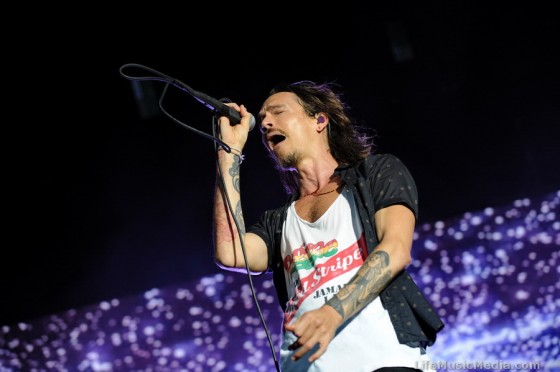 Three-piece band LE BUTCHERETTES took to the stage of the Enmore Theatre with a bang. We were captivated with the diverse vocals ranging from a classic style, to the heavy scream vocals in some tracks. A high energy and bizarre performance played out before us, that I am sure left most of the audience wondering what had just happened.

After a short break the lights went down and from the enthusiasm of the crowd, it was clear they were ready for ANTEMASQUE. The lead vocalist was quirky and different, however it was difficult to hear the lyrics clearly. Their high energy performance had the audiences’ complete attention, the quirky guitar riffs and unusual tone to the guitar created a depth to the performance that kept our attention but overall the performance was a little boring.

With a 5-minute countdown playing on the screen before us, the volume rose with the anticipation of INCUBUS taking to the stage. The opening bars of “Wish You Were Here” are unmistakable and the crowd erupted, were dancing and ready to sing. The visual show of the lights and graphics on the screen were captivating and really enhanced the night.

With flawless transitions between songs, they moved from one track to the next with ease, occasionally stopping to have a chat with the audience. Their authenticity really stood out to me, as the way they sounded live was just as good as their albums. It changes how you listen to the cd when you know it is how they are, and it hasn’t been over-produced.

As they move through the set, they transitioned beautifully through a range of old and new material, even giving us a preview of tracks on their upcoming ep. The vocals are clear, articulate and mesmerising. With each track the crowd emitted high energy and were singing along to so many songs including the more peaceful “If Not Now When” and “Promises, Promises” with its stripped back intro being just vocals and piano. The hairs were standing up on my arms as I listened to the crowd belt back to the band the lyrics of “Drive”, and the humble reaction of the band just topped it off.

The crowd was absolutely deafening as the night drew to an end and they demanded an encore. Ending with “Warning”, the lyrics ‘Don’t let life pass you by’ really hit a soft spot for me, and they ended the night with a bang.

Being a fan of their albums, it was a real treat to see this band live and in front of me and they didn’t let a single person down with their performance.