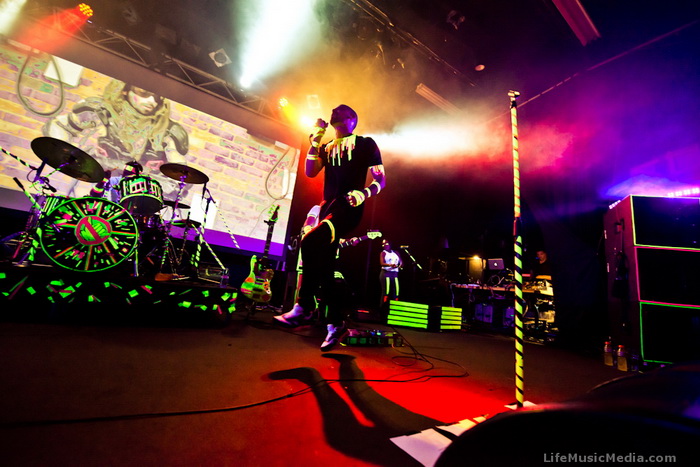 It is hard to summarise the night that was spent watching the glorious men of Bluejuice give it their all at the Metro Theatre for the last time, only because the night was filled with so much substance that I know something will linger past this review and remain with those who witnessed the show.

To start off the night, the relatively fresh band Jody welcomed the crowd with a breezy disposition, drawing a great likeness to the summer-indie image that more developed bands have owned. This kind of familiarity did take away from the experience the band was trying to deliver.

The energetic front man shone, taking great effort to cover all aspects of the stage in an attempt to conquer it as his own. It appeared that the band is still finding their footing as a live act but has the potential of becoming a summer staple.

Removing the shackles of a refined space, The Ashton Shuffle obliterated their set. Launching into Tear It Down (unfortunately the only original tack that was played) many forgot they were at a gig and were entranced by the pulsing beats harmonizing throughout the crowd.

Playing mixes of recent tracks and classic pop tunes, a few notable offerings of the night was Flume’s Drop The Game and Hermitude’s breakout tune Hyperparadise. Both tracks kept enough of their core to remain familiar, yet had enough of a new face to let fans fall in love with these tracks again.

Complimented by a vivid light show and somewhat mystifying smoke cloud, the stage was hidden apart from wayward lights piercing the smoke and directing itself onto the crowd.

To intensify the performance even more, our disc jockeys dropped consistent beat drops and hyped up the crowed so that we could have easily mistaken them as our headliner for the night.

This luckily wasn’t the case. Many eagerly awaited one band to appear on stage and in due time, they would do so to deliver an unforgettable performance.

For the very last time, Bluejuice took to the stage for a hometown show. Whether you’ve seen them laced in their golden spandex during the festival season or masked in ultra UV lights against the dimmed night, their shows always bring the best out of the crowd no matter the setting.

Launching us into The Recession, the crowd literally went nuts. Jake Stone wanted to make the show count and it really shone through in his over the top stage manner. These events included jumping from the top of the stage speakers into the arms of their passionate fans and hoisting himself up as a monument in the front row of the audience.

To combat Jake’s extreme enthusiasm, Stavros Yiannoukas played the role of the cool conductor. Keeping control over the set as he observed his stage partner and also focus on the overall aura of the band.

Transitioning from one hit to another, songs were accompanied by their supporting music video. This was a great nostalgic touch that allowed fans to see the physical and stylish progression of this band over the past few years.

Right before the encore the band welcomed their touring staff as well as the support acts to party along with them during Vitriol as a last hurrah to thank the people who’ve been with the band for so long. It was an encouraging sight to see the more appreciative side of the band.

Finally for the last time in their hometown, the band finished with Can’t Keep Up (a fitting song for their final show). In all honestly, it seemed like the show could have continued until the early hours of the day, but alas, as all things must come to an end, so did our time with Bluejuice.

With a legacy built on pushing boundaries, living life in the moment and becoming known as our resident smartarses, it is going to take time to heal from the absence of such a key player in our music scene.

Click Here for photos of headliner Bluejuice on the night.

Click Here for photos of supports on the night, The Aston Shuffle + Jody