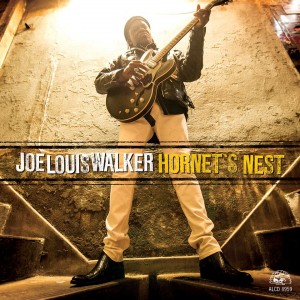 Joe Louis Walker has been a blues force since he was a 16-year-old kid playing guitar and backing the best of the best on the stages of his hometown, San Francisco.

“Through Michael, I met everybody,” Walker said. “Michael was the first real guitar hero. Eric Clapton was heard but not known or seen. Michael was seen, known and heard. And not just the blues. He’s the guitarist on ‘Like a Rolling Stone’ by Bob Dylan. When Bob went electric, Michael was in the band he went electric with—way before The Band with Robbie Robertson.”

The house Walker shared with Bloomfield in Mill Valley was a regular stopping point for musicians such as Country Joe McDonald, former Rolling Stone Mick Taylor and bluesman John Mayall, who wanted to jam. “When everyone was in town, they’d come and pay homage to Michael”.

Though he will turn 65 this year, JLW shows no signs of slowing down, and this Spring there are dozens of shows and festivals on his tour schedule, with stops everywhere between the West Coast of the U.S. and Switzerland. He is well-regarded by his fans and peers, and has picked up Multi Blues Music Awards; he has appeared on Grammy-winning projects from B.B. King and James Cotton. Blues fans can count themselves lucky that he has recorded 25 of his own albums, including Hornet’s Nest, his most recent release from Chicago’s storied Alligator Records.

It is inspiring that after almost 50 years in the business, Joe Louis Walker is still writing, recording, and playing a gruelling tour schedule. But it is even more impressive that he has not gotten into a rut and that his music is still innovative and pushing the limits of modern blues.

Walker proves that there are still great barnstorming blues artists letting it loose in clubs and ducking into recording studios when they get the chance. Hornet’s Nest proves that he is still pulling all the stops out, and it would be well worth your time to check him out when he starts the longest tour of Australia he has ever done.