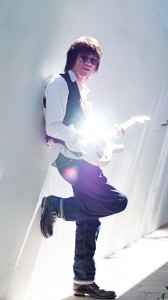 Heralded as one of the greatest rock guitarists of all time, Jeff Beck began his career in 1966 as lead guitarist for iconic British rock group The Yardbirds, a band responsible for graduating Jeff, Jimmy Page and Eric Clapton into the world of rock’n’roll.

From these early days and throughout his career, Jeff Beck has helped redefine and influence the role of guitar in rock music. Departing The Yardbirds at the height of their success, he embarked on what has been nearly four- decades of musical exploration, leaving a distinctive mark on hard rock, jazz-fusion and the evolution of modern music.

My Live Nation members can secure tickets first during the exclusive pre-sale beginning 10am this Monday, February 3. Become a member at www.livenation.com.au.

The Jeff Beck Group was founded in 1967 featuring Rod Stewart on vocals and Ronnie Wood on bass. The band released two albums, ‘Truth’ (1968) and ‘Beck-Ola’ (1969), both musical touchstones for hard rockers, before Jeff Beck continued onto an illustrious solo career.

Rolling Stone listed him as the No. 5 greatest guitarist of all time and to this day, he continues to push the boundaries of sound and the limits of what a guitar can produce, constantly touring and collaborating with the greatest musicians in the world. Most recently Jeff featured on Beach Boy visionary Brian Wilson’s latest album, as well as accompanying him on a 22-date North American tour in August 2013.

Special guest at the Sydney and Melbourne shows (Perth special guest TBA) will be the mesmerizing, blues-rock singer-songwriter, BETH HART. The LA-based, Grammy Award nominee – with a voice akin to the likes of Janis Joplin and Etta James – recently released her eighth studio album, ‘Seesaw’, the second collaboration with blues star Joe Bonamassa and garnering a Grammy nomination for Best Blues Album. In 2012, Beth joined Jeff Beck on stage at the Kennedy Centre Honors to pay tribute to blues legend Buddy Guy, covering Buddy’s ‘I’d Rather Go Blind’ – blowing the audience away. Beth is nominated for Contemporary Blues Female Artist of the Year for 2014 and continues to transcend the boundaries between blues, rock, country and more.

*Beth Hart not performing in Perth