LMM: What are you most looking forward to on the Bacardi Express tour?
MH: We’ve all been talking about the jam room and DJ booth. We are hoping to learn some classic songs to jam with the other bands. Hopefully we can jam some Supertramp.

LMM: Absolutely loved your music clip “Sometimes”, where did the inspiration for that come from?
MH: Originally we had a concept similar to a movie called “Logan’s Run”, but we let Moopjaw (Director/producer of “Sometimes”).

LMM: I hear they have a “Jamming” carriage aboard the Bacardi Express, is there any band in particular you wish to jam with?
MH: We are keen to have one big jam and get a community vibe going. Maybe we could do a version of “Give Peace a Chance”. Otherwise I guess it will be up to those that will tolerate self-indulgent noise making for three hours straight.

LMM: What is your guiltiest pleasure?
MH: At the moment we don’t mind a little drink watching “Kenny Vs. Spenny”. It’s a good way to escape any stresses and have a great laugh. Another would be 70’s movies at the moment. Has anyone seen “Holy Mountain”?

LMM: What is the most important lesson “life in a band” has taught you?
MH: One lesson I could pass on is that you have to maintain a balance that may be lacking in our odd hours of function. You have to be pretty self disciplined in structuring your time and keeping fairly healthy.

Advertisement
LMM: The Bacardi Express train has a jamming carriage, dining carriage, chill out lounge, gaming room and sleeper carriages – when you’re not in the Jamming carriage, which carriage do you think you’ll spend most of your time in?
MH: I think the chill out lounge sounds quite appealing, especially since we’ll be with some interesting people. This will be the place where we can have some good chats and recovery after the shows.

LMM: What inspired the band name “Miami Horror”?
MH: When I came up with the name I wanted something that was visual in its delivery that could provoke some feeling of a mental image or vibe. I also liked how both words were quite contrasting.

LMM: You’ve currently been touring Australia prior to the Bacardi Express tour and also have another tour lined up in May with GTM, do you have any plans about touring overseas?
MH: Our plans to go overseas have been dependant on the completion of the album, which is just about complete. After it is realeased we will have plans to tour U.S.A, Europe and hopefully Japan.

LMM: Benjamin, do you prefer playing solo DJ or prefer playing live with the band.
MH: Both have their positives but at the moment I enjoy playing live. This has given me many new experiences which have included meeting, playing and getting to know bands, plus it’s been amazing seeing people enjoy our music.

LMM: Which living person do you most admire, and why?
MH: Aaron Shanahan (Drummer/Producer buddy). He feeds me cheese and crackers, and is the nicest guy. 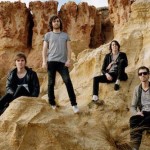