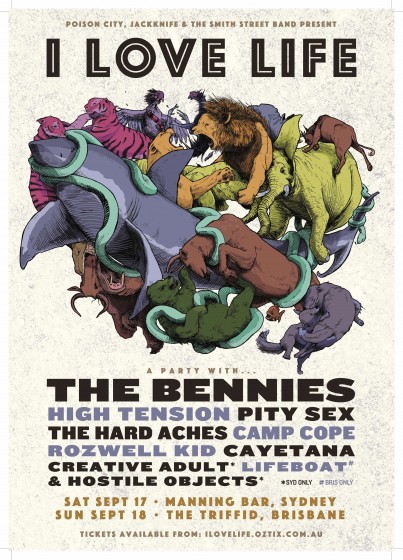 *** Local Supports Added ***
You’ve probably already got your tickets to I Love Life, so here’s just a reason not to lose’em… A couple local bands have been added to the line ups!

If seeing bands the likes of The Bennies, High Tension and Camp Cope didn’t already have you all jazzed for the festivities, local thrash punk rockers Hostile Objects will be opening up the Sydney leg, while alt-folk punkers Lifeboat will kick off the Brisbane show.

Hostile Objects have been ringing ears since 2012 and have played alongside such legends as Poison Idea, The Bronx, HardOns and Frenzal Rhomb. Special mention to their merch game… It is strong!

Lifeboat are something different entirely. More in the heartfelt songwriting vein like artists such as the Smith Street Band, these angsty alt-rockers admittedly write songs about themes they don’t understand, but they might know more than they let on.

Following a successful debut in 2015, mini-festival ‘I Love Life’ has announced it will return for a second year. Last year’s event was co-curated by Melbourne label Poison City Records and The Smith Street Band –taking it’s name from a track off the Melbourne band’s 2014 album Throw Me in the River– and heavily featured acts from the Poison City Weekender. This year is no different, with Melbourne party starters The Bennies heading up the bill for I Love Life in Sydney and Brisbane.

It’s been a party whirlwind for The Bennies since the release of their latest album Wisdom Machine earlier this year. Having already taken on huge album tours in Australia and Europe, the band are back at it as we speak, this week they commenced a huge 27-date tour of Australia. The Bennies will then return in September to bring the party to I Love Life.

Joining The Bennies are the brutally energetic High Tension, who started the year with a bang touring on the nationwide Laneway Festival. On the international front, fuzzy four-piece Pity Sex will make their second trip to Australia with their critically acclaimed second full-length White Hot Moon under their belt. Along side them, recent SideOneDummy Records signing and buzz live act Rozwell Kid will make their first trip to Australia.

The line-up is bolstered by even more exciting locals with Poison City Records’ hottest new signing Camp Cope making their much anticipated return to Sydney and Brisbane, following recent sold out album launches in both cities. Off the back of a new single and an Australian tour supporting Luca Brasi, Adelaide two-piece The Hard Aches will be representing South Australia on the east coast.

Philadelphian pop-punk trio Cayetana will be touring Australia for the first time, they’ve spent the last couple of years heavily touring America in support of their debut self-titled album. Run For Cover band Creative Adult will also join the line-up for the Sydney leg of the I Love Life mini-festivals.

On sale Now from www.ilovelife.oztix.com.au

On sale Friday June 24th at 9am
Tickets fromwww.ilovelife.oztix.com.au 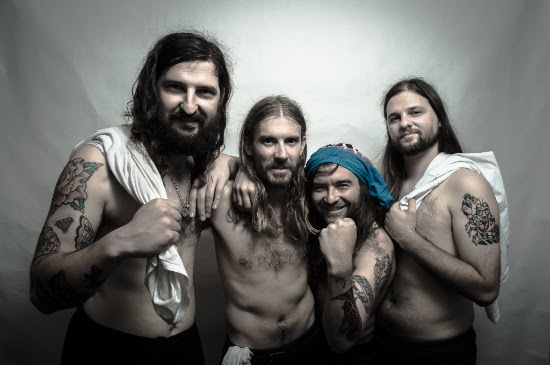