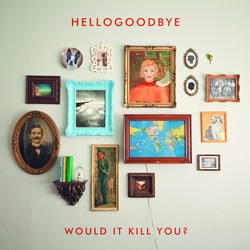 Hallelujah! Hellogoodbye have praised us with their return to the music world with the extremely dandy new release of their full length album Would It Kill You? An 11 track album that filled the void of the four years without a full length release from the Californian boys, since their release of Zombies! Aliens! Vampires! Dinosaurs! (released 2006). Would It Kill You? is truly an evolution for the band, maturing greatly from their previously dominant indie-synth and power pop sound; now embracing the indie pop rock sound that is ruling the music scene at the moment. The metamorphosis is extraordinary and definitely has done great things for the album and Hellogoodbye who have come a long way since their disco-esque electronics and syntehsised vocals on older tracks such as Shimmy Shimmy Quarter Turn.

“Finding something to do” is a great opener; a sweet and catchy indie pop beat that instantly spreads warmth throughout your body, you can’t help but bop along. It does it duty to whet the appetite of the listener, teasing them with what is to come. “Getting old” is another fantastic little number, reminiscent of English indie rockers, The Kooks; sweet and innocent, yet addictively romantic in a catchy upbeat way, with the combination of great vocals and brass instruments it really shows how far Hellogoodbye have come and Would it kill you? is full of these shocking little transformations that make for amazing tracks.

Would It Kill You? has a nice harmony of catchy indie pop tracks and sweet slower numbers that are still just as contagious and definitely are the little ‘gems’ of the album for me. The album is a unique venture for Hellogoodbye; whilst sill maintaining their infectious quality that they have always had, Would it kill you? delves into their creative side exploring variations in instruments, vocals and lyrics, which were clear to me with “The thoughts that give me the creeps”, the track of the album that stole my heart and definitely the limelight.

Another winner of the album definitely had to be “I never can relax”, with the interesting group ‘yodeling’ that added yet another element to the long list of unique bits and bobs of the already diverse album. I really tried to be subjective here, but it was hard to find anything at fault with this album! Would it kill you? is my favourite Hellogoodbye release to date and I anticipate where they will be taking this interesting new sound for them in the future.

Overall, I was extremely impressed with Hellogoodbye’s venture into a new style and they have matured greatly over the past few years. Would it kill you? is a great indie pop album that definitely brightened even the greyest of days.