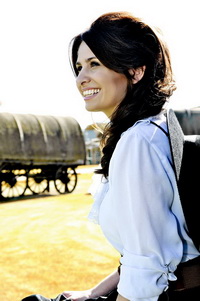 Following successful appearances at Woodford Folk Festival, Peats Ridge and NYE presented by the City of Melbourne over Summer, as well as sold out launch shows in Melbourne and Sydney for her current EP ‘Until Then, songstress Gossling has again hit the road and currently playing a string of shows throughout Australia – Bianca Martin (BM) caught up with Gossling vocalist Helen Croome (HC) for a chat.

BM – You’ve toured the country quite extensively in your short musical career – what have you been looking forward to most about this tour with Oh Mercy?

HC – I have been very lucky to support some amazing australian acts on their tours. I really enjoy getting to experience a different crowd in every town/city and it’s a joy to be able to watch Oh Mercy play their set every night.

BM – How has the tour been treating you so far?

HC – The crowds on this tour have been great and really supportive of my set. I’ve been playing solo for the majority of the shows on this tour and the guys from Oh Mercy have been very kind letting me tag along with them on the road.


BM – You’ve been able to play a few iconic Australian festivals – Woodford, Peat’s Ridge etc – which has been the most memorable so far and why?

HC – Both Woodford and Peats Ridge were amazing festivals. I’ve never really experienced a festival setting before and found it quite inspiring to be able to see so many acts all in the one location. I was a bit worried about being drowned out as a solo act at a festival. I didn’t think my softer style of music would lend well to a festival setting, but I was very wrong. The crowds at both festivals were incredibly responsive to my music.

BM – Can you tell us a little bit about what to expect from a live Gossling show?

HC – I guess my live show is fairly relaxed. My music lends well to an intimate setting. And if I feel like the setting is right, I’ll throw in a few dad jokes for good measure..

BM – You’ve been quite vocal about listing Damien Rice as an influence – is there anyone else in particular that you would cite?

HC – I’m not sure if they are influencing my writing but some artists I’ve been listening to lately are Sia, The Swell Season, Adele, The Basics and Kimbra.

BM – What emotions or reactions are you looking to evoke in Gossling’s music?

HC – A lot of my songs are based on love stories around intricate relationships. Hopefully my music evokes a range of emotions. A few people have commented that my music and lyrics can be quite depressing, but I don’t find them depressing. I think the depressing ones are quite sweet.

BM – How has the creative process for the second EP been compared to that of the first?

HC – As far as writing the songs on the second EP goes, that was the same as writing for the first EP. Where the EP’s differ is perhaps in the studio and experimenting with the arrangements of the songs. I enjoyed making both EP’s. i find the studio experience very interesting and creatively inspiring.

BM – Your latest single ‘I Was Young’ is a lot more upbeat than a lot of your other stuff – are you heading in a new musical direction?

HC – I really enjoyed recording this song for the second EP. It’s nice to mix things up a bit. This song sounds a lot more up beat then the rest of the EP, but the lyrical content is still quite deep and probably not what you’d expect it to be about with such a cheerful musical arrangement.

BM – You’ve released two EPs so far, are there any plans for a full length album in the near future?

HC – I would love to get another release out at the end of the year. Whether that would be another EP or a full album depends on a few things, but an album is definitely on the cards in the future.

BM – What does post-tour life hold for Gossling?

HC – After the Oh Mercy tour I’ll be playing a few more shows supporting The Little Stevies on their ‘Attention Shoppers’ album tour. I’m hoping to headline a few shows and have my own mini tour later in the year also.