Chugg Entertainment has announced that in the wake of these Camden shows and headline performances at this year’s Coachella and Glastonbury festivals, Gorillaz will be making their long awaited live debut in Australia & New Zealand in December 2010. With headline performances so far this year featuring appearances from the full Gorillaz entourage including Bashy, De La Soul, Mick Jones & Paul Simonon (The Clash), Kano, Little Dragon, Mos Def, National Orchestra for Arabic Music, Gruff Rhys, Shaun Ryder and Bobby Womack, we can’t wait to see who’ll be making the journey to Australia…
Landing in Perth on Monday 6th December, the tour kicks off at Burswood Dome before heading to the Adelaide Entertainment Centre on Wednesday 8th December. Next stop is Melbourne at Rod Laver Arena on Saturday 11th December, then north to the Sydney Entertainment Centre on Thursday 16th December before finishing their east coast run in Brisbane at the Entertainment Centre on Sunday 19th December.

The conception of the world’s first ‘virtual band’ all began a decade ago when music virtuoso, Damon Albarn and animator Jamie Hewlitt introduced us all to the fictional world of Gorillaz. A multi-genre quartet whose virtual members include 2-D, the delightfully flighty and enigmatic singer/keyboardist; Murdoc, the mysterious and irreverent bassist and the brains behind the group; Noodle, a ten-year old Japanese martial arts expert and guitar hotshot; and Russel Hobbs, the eloquent yet somewhat unhinged Brooklyn-bred drummer.

From their humble beginnings, the imaginative brainchild of collaborators Albarn & Hewlitt has grown and evolved and taken us all along for the wicked and wild journey. From Noodle’s assassination and reincarnation as a cyborg to Murdoc kidnapping 2-D and holding him against his will on Plastic Beach, their much anticipated arrival on Australian shores can only reveal the next instalment of the wayfaring adventures of Gorillaz.

Gorillaz latest album Plastic Beach recently debuted at #1 in Australia with chart success around the world, including #2 positions in the US and UK, and #1 in Austria. The album went to #1 in the Billboard Alternative Chart, and #1 in digital charts in USA, Australia, Austria, Denmark, Germany, Switzerland and the UK.

Playing songs from all three of their critically acclaimed albums (Gorillaz, Demon Days and Plastic Beach) this landmark arena tour will include a dynamic production featuring multi-media video animation, artwork and film. As Murdoc says “A phantasmagoria of sounds, colours and assaults on the senses.”

An exclusive fan club pre-sale offer will be available. For more details go to Gorillaz.com

Do not delay in securing your tickets to see this monumental live event.

TICKETS FOR ALL SHOWS GO ON SALE
FRIDAY 6TH AUGUST, 9AM 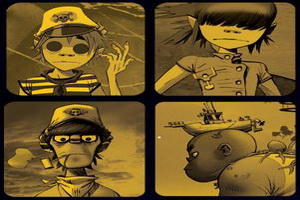