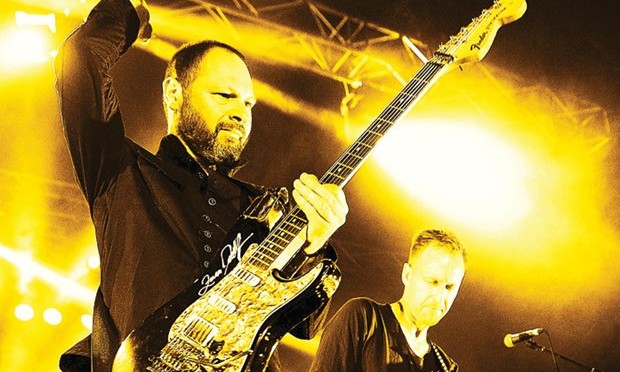 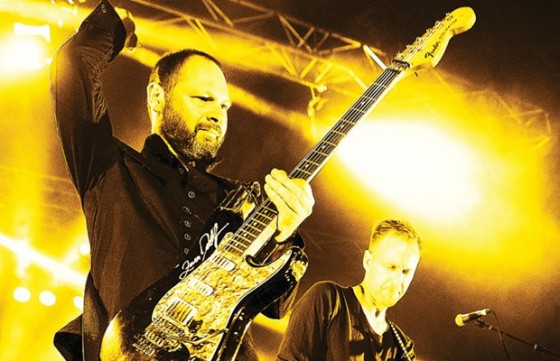 GOLD104.3 and iHeartRadio are excited to announce the inaugural PURE GOLD LIVE concert featuring twelve of the biggest acts of the 70s, 80s and 90s coming together for one night only at Melbourne’s iconic Palais Theatre on Friday, 8 May, 2015.

PURE GOLD LIVE will be three hours of hits and memories with twelve of Australia’s most well-loved 70s, 80s and 90s hit makers gracing the stage and taking a whole generation back to a time when rock ‘n roll was a way of life and there wasn’t a camera phone in sight.

PURE GOLD LIVE saw its first incarnation in Sydney late last year presented by ARN’s Sydney station WSFM. The event was an overwhelming success selling out well in advance and inciting a whole lot of reminiscing and more than a few all in sing-alongs from the enthusiastic crowd.

GOLD104.3 is thrilled to be presenting PURE GOLD LIVE hosted by Brigitte “Brig” Duclos and Anthony “Lehmo” Lehmann from GOLD104.3’s Breakfast with Brig and Lehmo.

Lehmo said “We will have to employ extra security to keep Brig off stage cos she will want to jump and sing along to every single one of the hits played!”

Without further ado, the legendary artists set to rock the roof off the Palais for PURE GOLD LIVE are (drum roll please) …

In a career that spans over 40 years, ROSS WILSON remains one of this country’s most respected artists. From Daddy Cool to Mondo Rock, as a solo artist, or as a songwriter of A-grade classics such as Eagle Rock, Cool World and A Touch of Paradise, or producer of the legendary Skyhooks, Jo Jo Zep, The Johnnys and more recently The Screaming Jets, Ross’s involvement with success has continued unabated. ROSS WILSON fronted Daddy Cool who exploded out of the 70s playing rootsy 50s sounds, then formed Mondo Rock who surfed the contemporary scene with chart topping singles and albums from the mid-70’s to late 80s. As a solo performer and prolific songwriter, ROSS WILSON has continued to perform and create music ever since much to the delight of his loyal fans all across the country.

DRAGON formed in Auckland in January 1972 and relocated to Sydney in May 1975, led by enigmatic lead singer, Marc Hunter, and currently led by his brother bass player, Todd Hunter. DRAGON had the nation in mass sing-alongs with their hits the No. 1 smash, Are You Old Enough?, Still in Love with You, Rain, O Zambezi and 1977’s hit summer anthem, April Sun in Cuba. DRAGON’s imprint on a generation was affirmed when Are You Old Enough? was used in the opening credits of the hit TV series, Puberty Blues. In 2008 the Australian Recording Industry Association recognised DRAGON’s iconic status when they were inducted into the ARIA Hall of Fame and in 2012 they celebrated their 40th anniversary with a string of sell out shows across the country.

JOHN PAUL YOUNG, OAM, is undoubtedly one of the most popular Australian artists of the 70’s, with a string of National and International hits including I Hate The Music, Yesterday’s Hero, Standing in the Rain and, of course, Love is in the Air, resulting in over 4 million record sales and cementing him a place in our music history. JPY was a Countdown regular, as both guest presenter, co-host and performer and his music became the soundtrack to the countdown generation, launching a career spanning more than 40 years. Along with performing, John has had equal successes in radio, television and theatre, including a Helpmann Award nomination for best supporting artist. In 2009, John was inducted into the ARIA Hall of Fame and in 2012, his 40th year in the industry, John was honoured with an Order of Australia for his services to charity and the music industry.

WENDY MATTHEWS is without doubt one of Australia’s most respected vocalists. Originally from Canada, Wendy was part of two of Australia’s most successful bands, Models and Absent Friends, taking lead vocals on the smash hit, Nobody but You, before embarking on a successful solo career. In the 90s Wendy released a slew of Top 20 singles including Token Angels, Let’s Kiss (Like Angels Do), The Day You Went Away and Friday’s Child and Top 20 albums: You’ve Always Got the Blues (with Kate Ceberano), Émigré, Lily, The Witness Tree and her compilation, Stepping Stones. Matthews appeared on three series of It Takes Two (2006-2008) and in 2014 released The Welcome Fire, her first originals album in 12 years, with songs co-written by Josh Pyke, Megan Washington, Mark Sholtez and many more.

Originally formed for a one off show in 1986, THE CHANTOOZIES amassed quite the following and went on to tour Australia extensively. They achieved great success with their original material Wanna Be Up, Kiss And Tell, Walk On and covers of Witch Queen, He’s Gonna Step on You, Love the One You’re With and I’ll Be There; all top 20 hits reaching platinum and gold sales. Throughout the 80’s and 90’s they shared the stage with many of Australia’s biggest acts and supported international act Billy Joel for an Australia wide 38 show tour. After taking time out to pursue their individual careers the girls reunited for ‘The 25 years of Mushroom Music’ in 1998, the ‘Countdown Spectacular’ tour in 2006 and again in 2012 when they supported Rick Astley on his Australian tour. THE CHANTOOZIES released their first new recording in 23 years in 2014, a cover of the Promises hit Baby It’s You.

Known for enduring hits such as That’s When I Think of You, Compulsory Hero, ‘To Love Me, Scars, Don’t Forget Me, and, of course, If I Could, 1927 made a devastating entry into the ears of its listeners with the Quintuple Platinum selling album …ish in 1988, which earned the band a slew of ARIA Awards as well as a lot of fans along the way. Following up …ish with the multi-platinum second album The Otherside, a self-titled third album, and countless live shows at home and abroad, the last couple of decades have certainly earned 1927 legendary status. Not content to rest on their laurels, after more than ten years, 1927 released a new studio album Generation i in 2013. It may just be the band’s finest album yet.

ROSE TATTOO, led by Angry Anderson, was formed in Sydney in 1976 and were renowned as “one of the most revered bands of all time” with their “peerless, street-level heavy blues’ with the emphasis on slide guitar and strident lyric statements”. ROSE TATTOO’s first four albums were produced by the legendary team of Harry Vanda and George Young who also worked with AC/DC, and spawned songs including Bad Boy for Love, Rock ‘n’ Roll Outlaw, Nice Boys, We Can’t Be Beaten and Scarred for Life through the late 70s early 80s before disbanding in 1987. ROSE TATTOO subsequently reformed briefly in 1993 to support Guns N’ Roses on an Australian tour and again from 1998 and have since released two more studio albums.

PSEUDO ECHO formed in 1982, releasing their first album, Autumnal Park, in 1984 which skyrocketed the band to household name status across the country. Their second album, Love an Adventure, spawned another string of hits including its title track, Don’t Go, Try, Living in a Dream and their remake of the Lipps, Inc. song Funkytown, which brought the group their biggest international success and spent seven weeks at No. 1 in Australia from December 1986. In 2012 PSEUDO ECHO celebrated their 30th anniversary and this year released their sixth studio album, Ultraviolet.

When GANGgajang’s beloved friend and bass player Chris Bailey passed away in 2013, four original members Cal Callaghan, Buzz Bidstrup, Geoff Stapleton and Robbie James made a pact to continue on as Chris had wished to celebrate 30 years since the band began. GANGgajang released its first single, Gimme Some Lovin’ in November 1984, reaching the top of the charts in early 1985. Shortly after, their self-titled debut album gained the number one spot in Perth and Brisbane with their quirky anthem Sounds of Then (This Is Australia) quickly finding a place on mainstream radio across Australia. Four classic albums followed including the cult Quiksilver film Mad Wax soundtrack, a retrospective DVD, and countless tours of Australia and Brazil. The band eagerly looks forward to its 30th year celebration.

“Compu-PU-pu-PU-pu-PU Computer Games”! If that chorus from the MI-SEX hit isn’t familiar to you then you didn’t live through the early 80’s. This international hit single preceded the glut of similar-sounding British chart entrants by a year or more and became one of the defining pop-rock songs of the Australasian music-scape. It ascended to #1 on the Australian charts during November ’79 and hit the top five in New Zealand. By April 1980 Computer Games had charted in more than 20 countries, and had peaked inside the top ten in Canada, France, Austria, Italy, West Germany and South Africa. It took lead singer, Steve Gilpin’s unfortunate death in 1992 to force MI-SEX underground for 20 years and the simple acceptance of an invitation by Steve Balbi to front MI-SEX at a private party and the Christchurch Quake Relief Concert to confirm the right chemistry that would once again ignite their passion for “live performance” and we couldn’t be happier.

Featuring Grace Knight on vocals and Bernie Lynch on guitar and vocals, EUROGLIDERS took the charts by storm in the 1980s. Audiences were blown away, and Grace Knight captivated fans with her ‘manic ballerina’ stage persona. In 1984, EUROGLIDERS released their album This Island, which spawned their No. 2 hit single, Heaven (Must Be There). Heaven also peaked at No. 21 on the United States Billboard Mainstream Rock chart, and appeared on the Hot 100. Another Australian top ten album, Absolutely, followed in 1985, which provided three further top ten singles, We Will Together, The City of Soul and Can’t Wait to See You. Grace and Bernie, along with their superb band, have reunited to once again captivate audiences with their sophisticated and high-energy brand of pop.

CHOCOLATE STARFISH burst on to the charts in 1993 with their classic cover of Carly Simon’s You’re So Vain. A string of original hits followed, including Mountain, Four Letter Word and Accidentally Cool. CHOCOLATE STARFISH released just two albums before taking some time out – 1994′s self-titled debut (which spent two months in the Top 10) and 1995′s Box (which reached number six). CHOCOLATE STARFISH was Australia’s hardest-working band in the ’90s, playing more than 700 gigs between 1993 and 1997, once doing 22 nights in a row. The band never officially broke up, they just simply stopped playing in 1997. Fast forward to now and the band have recently released an acoustic record Born Again Versions and returned to doing what they do best performing with all the joie de vivre they are renowned for.

Tickets for PURE GOLD LIVE go on sale on Friday, 13 February at 9.00am and are expected to sell FAST so don’t miss out on your opportunity to see these legendary Aussies on stage.