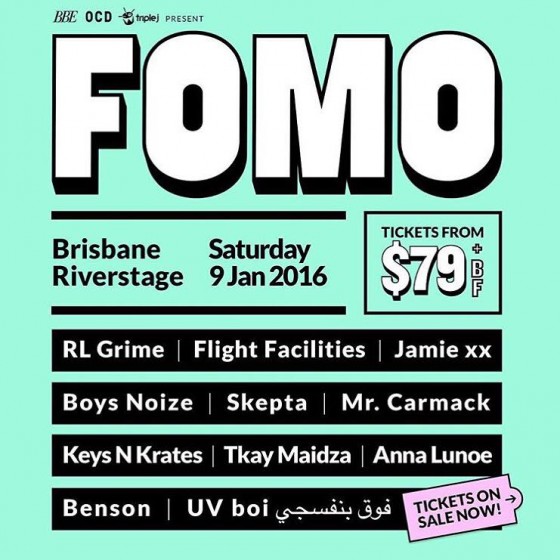 Brisbane, get ready to start 2016 with and without FOMO – an unmissable day and night with a soundtrack to an endless summer. BBE, OCD and triple j are extremely proud to introduce a brand new, carefully curated boutique festival experience exclusive to Queensland. Set to take place amongst the iconic natural amphitheatre of Riverstage on January 9th, this inaugural, intimate and affordable event makes sure our sunny state friends are going to #FIGHTTHEFEAR together. Tickets are on sale, available through fomofestival.com.au.

FOMO is where socialising with friends and connecting with music creates a vibrant positive energy. We understand you’re like minded people, so why pay for a long list of artists that you can’t physically hear and see in one day? Why bother with multiple stages when you just want to stay with your friends in the one spot?

FOMO has got you covered with world-class international talent, and a line-up of locals who we love. From the doors opening at midday to a banging closing set finishing at 10pm, you and your mates won’t miss out on a single act.

Introducing the FOMO class of 2016:

LA trap lord RL Grime returns down under after his ginormous sell-out tour in April/May 2015. His highly anticipated debut album ‘Void’, featured the likes of rapper Big Sean, Boys Noize, Djemba Djemba and How to Dress Well. Revered as one of the best producers in the game right now, seamlessly blending bass-heavy dance music and Southern hip-hop. Watching our headliner drop ‘Core’ at the end of the night, is going to be a festival moment you absolutely cannot miss.

Flight Facilities dropped their debut album ‘Down To Earth’ last year. Since then Jimmy & Hugo have taken a long-haul flight around the world ticking off four European, two US and two Australian tours, including festival appearances at Glastonbury and Splendour In the Grass. The pair are showing no sign of slowing down, with their biggest and most collaborative show to date incoming to Melbourne, joining the Melbourne Symphony Orchestra at the Sidney Myer Music Bowl in October. Come take flight, with Flight Facilities at FOMO Festival, who will be joined on stage by the lovely singer songwriter in her own right Owl Eyes, to perform their summer anthem ‘Heart Attack’.
Jamie xx’s debut album ‘In Colour’ kept listeners warm all winter. Working with and without his Mercury Music Prize-winning group the xx, he established himself as a forward-thinking beatmaker and producer. Whether he’s creating sounds for the much-loved London based band, hip-hop pioneer Gil Scott Heron, or releasing remixes for the some of the world’s most renown musicians including Adele and Florence + the Machine f or Djing at the likes of Boiler Room or New York’s PS1 parties, Jamie xx creates the unique sounds of underground dance movements harmonised with pop sensibilities.

:) Boys Noize will have you texting more smiley emoji’s than at the stroke of midnight with Alex Ridha’s trademark wizardry behind the decks. One of the world’s biggest names in dance music He has collaborated with Snoop Dogg, genius film maker Mr. Oizo (on a project called Handbraekes), Erol Alkan, and most recently Skrillex (under the moniker of Dog Blood) and won Beatport’s ‘Best Electronic Act’ three years in a row. Head of his own label Boysnoize Records, the imprint is now home to more than a dozen artists including SCNTST, Le1f, Spank Rock, Strip Steve, Peaches and Siriusmo.

England’s freshest export, and the hottest act in the world right now, Skepta is another unmissable debut on the FOMO line-up. The long time grime legend has been at the forefront of the bubbling UK scene for many years, as a solo artist as well as a member of the Roll Deep and Boy Better Know cliques. This year, Skepta has gained widespread attention after co-signs from the likes of Kanye West and Drake, and it looks like he’s ready to extend his international grasp.

Already carving out a global reputation as one of the most creative and unique producers in the game, multi instrumentalist Mr. Carmack is constantly busy putting out his prolific releases through Mad Decent, Team Supreme, Soulection and occasionally just dropping free beats through his bandcamp. This LA-based producer, by the way of San Fran and Hawaii, has been blurring the distinction between hip-hop and dance music in such a progressive way that has even the most experienced producers scratching their heads. After last year’s incredible sunset sets at Let Them Eat Cake and a headline show with Cashmere Cat for BEAR OPS, it’s clear he’s becoming one of Australia’s favourite, and most unpredictable selectors.

Keys N Krates formed as the brainchild of drummer Adam Tune, synth/keyboard aficionado David Matisse and internationally award-winning turntablist Jr. Flo. The Toronto trio came together with the desire to bring their blend of live electronic instrumentation to the stage. They’ve often been referred to as the world’s only “trap band,” a title they reluctantly accept. Tune says it best: “At the end of the day, people are going to call us whatever they want. We are referencing everything from classic house music to Timbaland in our beats, but I think the trap references tap into what the current sound is, and we are okay with that.”

Australia’s new favourite singer/emcee Tkay Maidza has carved out a name for herself picking cash over shitty friends, stomping her feet like a dinosaur and general rave vibes with her lightning fast flow and mega-watt grin. This young musician has just casually picked up co-signs from the likes of Mark Ronson and Run the Jewel’s Killer Mike along the way, and delivers one hell of an energetic live show.

“I’m your high-heeled killer, I’m your midnight thriller, I’m your bass drum dealer – and I always deliver.” These lyrics come from the title track of Anna Lunoe’s bold 2014 release ‘Bass Drum Dealer (B.D.D.)’, and they pretty much define her as an artist: a tough contender in the boy’s club of international DJs, demanding to be noticed for her musical innovation, pure performance power and seemingly endless energy. Anna Lunoe is equal parts DJ, vocalist, songwriter and producer, she’s been a radio show host as a DJ, she is as an underground club killer with the unique ability to conquer the biggest of festival stages, whilst consistently delivering up productions for the likes of Mad Decent that transcend EDM clichés, laced with her distinct, crystalline vocals.

Benson represents everything that your parents hate, He plays loud sub bass driven house music, drinks a dangerous amount of alcohol and stays out way past his bedtime. Benson resides in Melbourne but spends a lot of time blowing up expensive sound systems in clubs around Australia and abroad. Benson has worked with such major labels as Sweat It Out, Ministry Of Sound & Sony BMG while still finding time to manage his very own boutique label “Say Wat Records”. Benson has also “shredded” stages at the following music festivals: Splendour In The Grass, Parklife, Stereosonic & Summadayze. We’re thinking FOMO and Benson will be getting along just fine.

UV Boi is the Tumblrfied aesthetic musical project of 18-year-old Brisbane local. Bringing mellow, genre melding, yet heavy hitting 808’s music, he is with no doubt one of the most refreshing producers coming out of the scene. Over the short course UV Boi has been presented as a triple j Unearthed featured artist of the week, a collaboration with one of the game’s heroes, Ryan Hemsworth and won the 2014 title of Undiscovered Artist Of The Year for ‘Inthemix Awards’. UV Boi’s dedicated fan base has been growing daily surpassing the ‘undiscovered’ tag and we can’t wait to see him play on one of the biggest stages of his hometown!