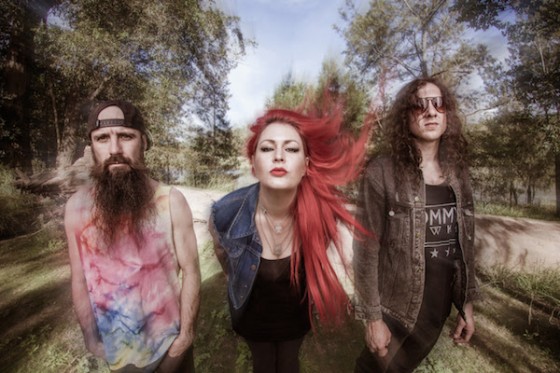 Dallas Frasca has long been held synonymous with “touring” and 2016 is shaping up to be another full on year for the rock trio. Set to jet off to Europe shortly on their sixth international tour, they’ll join The BellRays on a 23-date run across the continent in May, taking in France, Switzerland, Italy and Germany.

The BellRays, known for their mix of punk, rock and soul, toured Australia last August, with Dallas Frasca joining them for a whirlwind week of shows. The perfect match for each other, the bands hit it off immediately.

“This tour will be a great opportunity for the band to break new territories in Europe and road test a stack of new material the band have been working on. I am also such a huge fan of Lisa Kekaula’s ridiculously awesome voice (also known for Basement Jaxx hit song, ‘Good Luck’) so will be super cool to watch ‘The BellRays’ every night on the tour,” said Dallas Frasca. “We all had so much of a good time on the Australian tour, we decided to head into Hot House Studio in St Kilda and lay down a track together featuring both bands, it was an incredible honour to be in the presence of greatness – stay tuned for the release.”

Melbourne-based Dallas Frasca, is no stranger when it comes to heavy touring, having been on the road for much of the past decade, most recently in support of the bands album, Love Army, which debuted at #29 on the ARIA Albums Chart and #10 on the ARIA Australian Artist Albums Chart in April 2015. One of the singles from the album, Success Is The Best Revenge, went on to become the theme song for Australian reality TV show, Bondi Ink, with a global sync.

Before heading off, Dallas Frasca’s also due to play a few shows in Australia, including performing at the Kidgeeridge Festival in Milton and the bands farewell show at Cherry Rock Festival alongside Ritchie Ramone, Kadavar & Supersuckers in Melbourne. Check dates below.