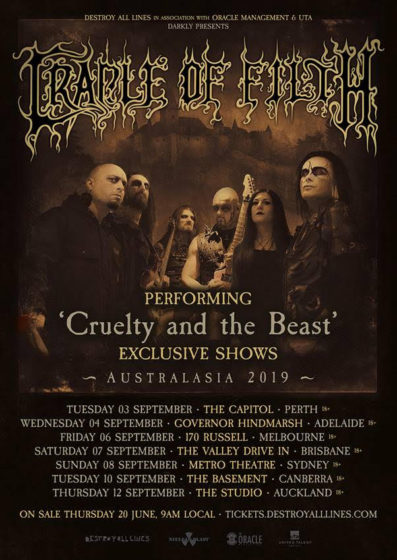 Performing Cruelty and the Beast in full.

When you talk about classic albums shaping genres Cruelty and the Beast by CRADLE OF FILTH sits proudly and menacingly at the top of the tree for extreme music.

In 1998 Cruelty and the Beast was released and showcased the band’s hybrid of brutality and macabre romanticism, crafting a concept album based on the life of Hungarian Countess and mass murderer Elizabeth Bathory who tortured and murdered hundreds of young women in the 16th and 17th centuries. The album was both bombastic and grandiose, inflected with gothic touches, yet unquestionably rooted in black metal. In addition to the feral bludgeoning and the slower, more melodic keyboard passages, Cruelty and the Beast featured three haunting, elegiac instrumentals filled with chiming organs, horrified screams and synthesized orchestra parts that enhanced the drama and split the presentation into three acts. No other band other than CRADLE OF FILTH would have been capable of creating such an opus.

As a concept album, it is executed with perfection…creative, intelligent, shocking, written brilliantly and played expertly. This is the only chance CRADLE OF FILTH Australian fans will ever get to witness this masterpiece live.