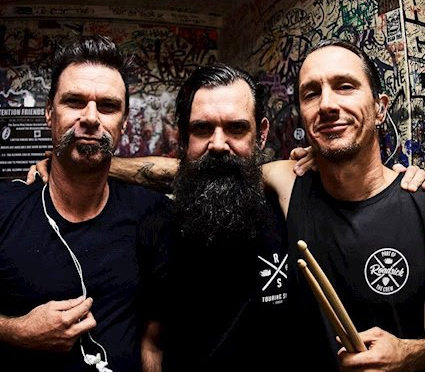 Following the releases of 2018, The Middle and Altered States, progressive trio Cog are set to release their third single as they redefine their practice within the modern music landscape. In succession of 2008’s album Sharing Space, the Australian underground icons are running into 2019 with a track that will bring them closer to their followers, Drawn Together.

With ascendant harmonies and perception shattering changes, Drawn Together draws on the intrinsic value in social connection to break through modern misdirection and offer solidarity via determined riffs and compassionate declarations. Unreserved in its conviction, Drawn Together follows on the success of The Middle which was released last year to critical acclaim and significant radio play on national broadcaster Triple J.

A testament to their creative camaraderie, Flynn Gower (vocals, guitar) and Lucius Borich (drums), have been playing together since 1998, the two engaging Luke Gower, the brother of Flynn, to play bass. Now a trio with an entrenched bond, Cog established themselves as a popular gig attraction in Sydney and the surrounding state of New South Wales, and following the release of a 2000 demo recording, Pseudo, they were soon signed by the independent label Little Samurai, resulting in a few EP releases: Just Visiting, Pt. 1 (2002), Just Visiting, Pt. 2 (2002), and Open Up (2003).

Cog’s full-length debut album, The New Normal (2005), is the result of working with Sylvia Massy, who had produced Tool’s Undertow (1993) and is now hailed as a classic. Having debuted in the Top 20 of the albums chart, hitting number one on the Australian Independent Recordings (AIR) chart and was voted number 50 in the Australian Albums of All Time; moreover, the album spawned the popular radio single Run, which reached the Top Five of the AIR singles chart.

With the release of Drawn Together, Cog are now set to reconnect with their fans with the commencement of both national and international tours. Co-headlining their Distant Lands tour alongside of Australian contemporaries SLEEPMAKESWAVES, returning to Europe and the UK in March after 11 years. Cog’s national Drawn Together Tour aligns the band with Osaka Punch and Omnific over the course of 5 months for a tour throughout Australia’s major centres that will prove to be a consistently potent showcase of musical innovation.

‘Drawn Together’ by COG is available in digital stores from 8th February.