While it’s so easy to lumber Clutch in with the rest of the stoner crowd, their style boasts too many other elements to keep it restrained to such a narrow pigeon hole. It’s also – more often than not – too energetic and vibrant to properly fit. Existing fan or not, watching this two DVD set will certainly go far to leaving you with an entirely new perception and appreciation of the Maryland four piece.

‘Live…’ consists two full-length DVDs: the first being a live show recorded at the legendary Washington DC ‘9:30 club’ in 2009. Boasting a full 19 songs over more than 90 minutes, the disc actually includes the band performing their 1995 classic self-titled album in its entirety – something many bands have decided to do over the last several years.

Don’t think that all you’ll get is that one album, though. There are six newer tracks from the band’s excellent ‘Strange Cousins from the West’ that tie up each end of the set; giving you a good taste of the group’s southern-fried, smoke-imbued rock.

Filmed in high-definition on seven cameras positioned on and around the stage, you get plenty of good angles. The editing remains simple and tasteful without any fancy, gimmicky effects that could just date the whole thing a few years down the road. Overall it shows the band in fine form with tight, thumping grooves courtesy of drummer Jen-Paul Gaster and bassist Dan Maines – you can even see the burly security guard swaying to the music down in the pit! That’s not to discount the obvious talents of guitarist Tim Sult or charismatic frontman Neil Fallon; who stalks the stage with more energy than the other three combined.

Disc two follows Clutch across the USA and Canada on their 2009 tour, split up into city-by-city chapters with a ton of extra bits in between. Taking place over an impressive 118 minutes, each band member is interviewed on more than one occasion and you’ll see celebrity appearances by such folks as Shavo from System of a Down (who claims Clutch is his favourite band ever), stoner legend Scott Seinrich and members of CKY, Fu Manchu and more.

It’s an enlightening viewing experience for anyone who is wishing to get into the band, wanting to know more or even established fans. The band hand out a ton of information about their history, including the addition of some rare performance footage as early as their second-ever show and their first US tours in 1991 and ’92, respectively. On top of this, the guys also spend a decent amount of time in their interviews talking about their gear selection and how it affects their recordings and live performances.

Finally, the second disc also features interviews with a ton of fans, their crew and record producer. It’s an excellent celebration of the band as they reach their 20th anniversary in 2011 and an excellent addition to any fan’s collection. 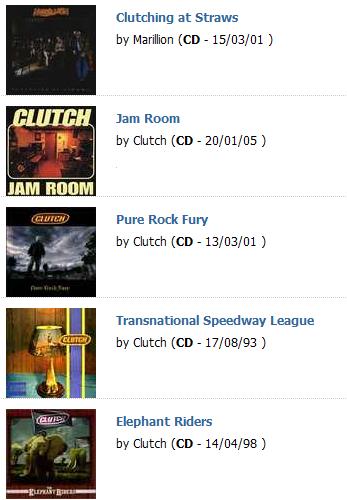