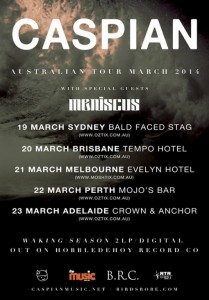 CASPIAN have announced their first ever Australian tour dates for March 2014.

Known in post-rock circles for their impressive live show and melodic instrumental epics, the tour supports the release of their watermark record ‘Waking Season’ through Australian independent label Hobbledehoy.

Formed in 2003 in Beverly, Massachusetts, the band has enjoyed an inexorably rise since the propulsive rhythms and ecstatic washes of their debut 2005 EP ‘You Are The Conductor.’ Channelling Pink Floyd, Mogwai, Godspeed You! Black Emperor and Penderecki, they tapped into a seam all their own. Expanding their ranks to a three guitar attack in 2007’s ‘The Four Trees’ they continued experimenting with their sound through classical motifs to what would become ‘Waking Season’, produced by Matt Bayles (Russian Circles, Minus the Bear, Mastodon, Minus the Bear and Mono).

Throughout, the band have build a formidable live reputation off the back of consistent touring through the Northern Hemisphere. In addition to extensive solo headline tours, a diverse range of European & US tours with God Is An Astronaut, Minus The Bear and Defeater, as well as a sold-out North American co-headlining run with 65daysofstatic late last year established the band’s demand as a live draw on an upward trend. Recent jaunts through Asia have missed the Australian continent until now. This March they will trek through Sydney, Brisbane, Melbourne, Perth and Adelaide on a headline club tour.

Touring as support will be Sydney cinematic instrumental group Meniscus, who themselves are coming off the back of successful European & Australian touring in support of 2011’s War of Currents album.