Blunt, brutal, fuelled by rage but above all, completely honest, Buried In Verona are primed to take their new set of anthems to their faithful and their critics in equal measure when they hit stages everywhere from mid September.

Buried In Verona have been through hell. Finding themselves deceived by those they trusted most and staring oblivion in the face at the end of 2014, they regrouped, recruited fresh blood and refused to let the world get the better of them.

On August 7 they release their new album, Vultures Above, Lions Below via UNFD. Mixed and mastered by world-renowned engineers Fredrik Nordström and Henrik Udd (Bring Me The Horizon, Architects, Soilwork) at Studio Fredman in Sweden, the album was written, produced and recorded entirely by the band. As a result, it’s the most powerful, honest and exciting album to ever wear the Buried In Verona name. Listen to their new single “Can’t Be Unsaid” here – http://bit.ly/BIVsong.

The new Buried In Verona has lost none of the power that saw their last two albums debut top 20 in the ARIA charts. With three new members bringing a new focus and perspective to the fold, this is the sound of a changed band who have decided that nothing less than revenge on the world that spat them out will do.

Hand Of Mercy are the perfect touring partners for BIV. Having honed their devastating live show to a ferocious, razor sharp point, the Sydney bruisers have one of the most identifiable sounds within the genre and with last years album Resolve (via UNFD) being their most successful to date, HOM are on top of their game.

Polaris have been making a lot of noise lately. A year on from their debut EP ‘Dichotomy’ the band have released a new single ‘Unfamiliar’ which has generated a mass online following in it’s support and there seems to be no signs of slowing down for the Sydney 5-piece any time soon. Becoming road dogs akin to the likes of Hand Of Mercy, Polaris are blowing crowds away with their high energy and infectious live shows.

BURIED IN VERONA
‘Vultures Above. Lions Below Australian Tour 2015’
With Guests HAND OF MERCY & POLARIS 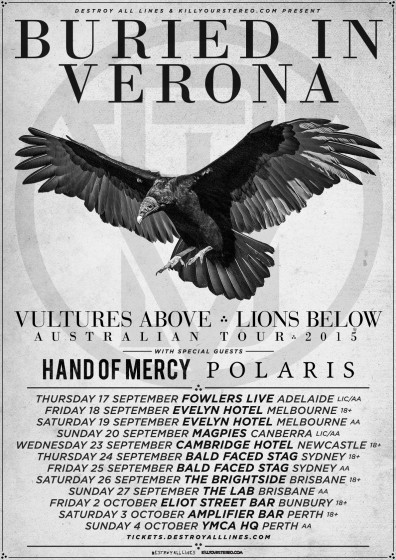