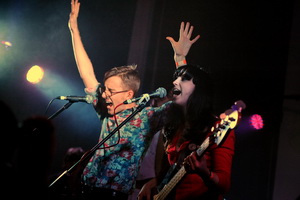 It was about time that Ball Park Music headlined their own tour. With presence and personality like theirs it is hard to stay in other bands’ shadows. The sellout crowd at Alhambra Lounge were treated to an exhilarating and upbeat show.

Local band Millions warmed up the crowd with smooth vocals, a steady snare and a nostalgic 90s sound. Concertgoers had their eyes on the band and were nodding along.

“Those Girls” was a perfect choice to finish their set, a really sweet and soulful song. It is just a shame Millions were a little too consistent in their sound; their songs would be engaging enough to get the crowd pumped up if they worked on their showmanship. The mixing let them down a bit too.

By the time Adelaide stars CITY RIOTS came on people were in the mood for dancing, and they kept the crowd in the mood right through their set. Dan James (Drawn From Bees) joined them for their closing song, an energetic cover of Springsteen‘s “Dancing in the Dark” which really pleased the crowd.

Ball Park Music got straight into entertainment with the popular “iFly.” It is impossible to pick highlights from their set: there was not a dull moment and every song had people singing and dancing along. They unveiled the cheerful new track “It’s Nice To Be Alive” and did not overlook other old favourites like “All I Want Is You,” “Rich People Are Stupid”, “Glass Jar” and “Culture Vultures In The Year 2008.”

Their cover of Coldplay’s “Clocks” was second in the setlist. That was the joke, anyway. Their choice of cover song was the classic Presidents of the United States‘ “Peaches.” It’s one mark of a fantastic live band that the token cover song in a set is just as well-received as their originals, instead of more so.

Sam Cromack’s stage presence is what really made the show so special. Between every song his chatter had the crowd laughing. Indeed, he so won over the fans, when he jumped into the crowd of people it took two attempts to extricate himself and return to the stage to finish “Sad Rude Future Dude.” Just as well for the rest of the cities on the tour. Going by this performance Australia is in for a treat.

This was one of those shows that will be remembered as not only awesome, but a landmark occasion. Ball Park Music hardly lack energy in their recordings but to see and hear them live is an incomparable experience.