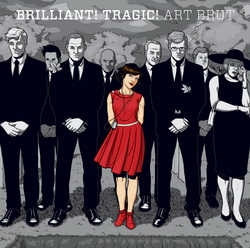 Brilliant! Tragic! definitely is anything but tragic. It is the fourth album from Berlin-based English and German punk rockers, Art Brut. It is a great 10 track album that promises rather drastic changes which have sparked quite a few heated discussions since its release in May this year. Art Brut as always promise a contagious concoction of strong gutsy instruments and cheeky punk vocals which are prominent throughout the entirety of the album, with some tweaks here and there.

A major change that is evident right from the start of Brilliant! Tragic! is that Eddie Argos, the band’s lead actually sings! Yes, Argos has swapped his trademark ‘talking’ and shouting on previous albums to actual singing. Many may be shocked, possibly even annoyed or angry with this change, but personally I thought it was a bold venture and in some tracks it definitely worked, others not so much. However, Argos’s gleeful immaturity and raucous cockney sounding accent is still present on Brilliant! Tragic! (thankfully!)

The first track of Brilliant! Tragic! “Clever clever jazz” is a superb opener, with the inviting instrumental and then the accompanying vocals which kicked in just before the minute mark were definitely attention grabbing, with the spoken 1970s kind of English punk swagger oozing a sex pistols kind of charm.

“Lost weekend” is another great track that is contagious with its cheeky lyrics reminiscing an alcohol fueled weekend between two people, “I’m sorry if I embarrassed you by saying something stupid like I love You, it was a lost weekend, we took our clothes off, it made no sense”.

“Sexy sometimes” certainly does deliver with an especially sexy instrumental intro that gets your hips swaying and with Argos’s seductive crooning of lines such as “everybody wants to feel sexy sometime”. This track really does make me enjoy the changes Art Brut have taken on for their fourth album and I was almost disappointed when I listened to “Martin kemp welch fire a side football rules!” as it very much echoed older Art Brut sounds, which don’t get me wrong, I do like, but I was really embracing their new ventures.

“Axl rose” for me was a real down point of the album, another disappointing moment as I felt that between the rather forced screaming in the beginning of the track to the slew of insults and profanities spewing out, it really is a combination of forced punk and word vomit. It really is a shame because most tracks on the album really are good, perhaps this was the tragic element they were echoing in the album’s title

Thankfully, the track is followed by “I am a psychic”- which is catchy, a little cheesy, but I think that adds to its charm and certainly it picks up the album and carries on with another favourite of mine, “Sealand”. A refreshing closer for the album; the 10th track and finally a fairly slow number for Art Brut, that added another element to the album and I was glad to hear it. It was a great track showing that Argos and the band could take it down a notch and really let their rock style shine through.

Brilliant! Tragic! In my opinion was a bold step in a new direction for Art Brut and I certainly think they did it to the best of their ability. Sure, the album at some points seemed confused between their older style and the newer styles they were exploring but I think overall it was a great effort and I would definitely recommend a listen if you haven’t already.