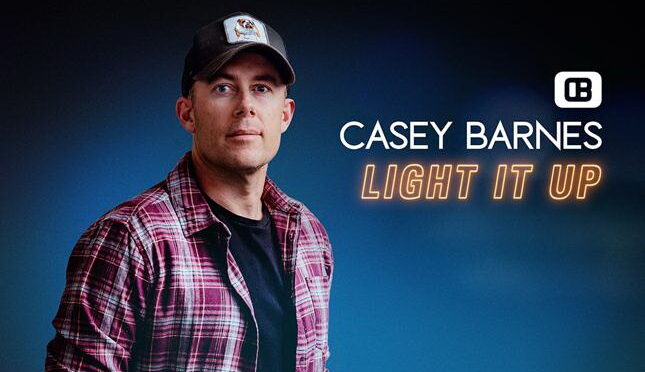 Casey Barnes has been around for more than 15 years now since appearing on Australian Idol in 2009, after releasing his debut album in 2007.  Spending the next 10 years as a hard-working journeyman, recording EPs 3 more studio albums, he released Live As One in 2017 which spawned a couple of solid singles in Just Like Magic and The Way We Ride, as well as the video for the title track.

Picked up by the legendary Michael Chugg on the strength of a couple of tracks to be released on Town Of A Million Dreams in 2019, Casey has gone from strength to strength, and without COVID would have had a stellar couple of years on the back of that record.

Roll on two years, and Casey has written a bunch of superb, catchy, country pop-rock numbers for the new album Light It Up, with long-time collaborators MSquared (Michaels Paynter and Delorenzis) and some Nashville-based writers, the album opens with Get To Know Ya, a classic modern country tune released in January as another teaser for the album, and loosely based on the opening up of places and relationships as we move through COVID.  The band lights up with Kiss Me Like You Mean It, which has a heavier feel, without losing any of the instant catchiness – this is what to expect from Casey’s live show.

The album features a softer side with Small Town, a quality country pop ballad, and the superb God Took His Time On You, written for Casey’s wife, which makes the hairs on the back of your neck stand up.  But the ones that have the real punch like Come Turn Me On and title track Light It Up see the band deliver some crunchy guitar lines, while Casey shows off his powerful vocals, whose range has developed and matured.

There is certainly a sense that Casey is looking towards the USA with this record, with an overall feel that sits very comfortably alongside the likes of Luke Bryan, Kane Brown and Cole Swindell, as well as harnessing the poppier side of modern US country music which is so popular with the fans, and this comes out strongly with Up In Flames.

Love Fool is an upbeat bouncy number, with some great lead and contrasting backing vocals, and a real hook in the chorus.  The real Casey bubbles up with This Ain’t The Encore which has power and soul, as well as a cracker of a guitar melody – this one you just want to turn right up and let go.  And the album closer, which now closes the live shows, is a red-hot country rocker that builds and builds, with a quirky mid-section, some fast-paced drumming, some chaotic voices, and a blistering solo, before the euphoria of the final couple of choruses.

The next leg of the Australian tour kicks off on Friday night May 6th in Newcastle at the Cambridge Hotel with Josh Setterfield as support, and then moves down to the Big Country Music Festival in Berry on the 7th, before heading up to QLD for a few more dates.  Later this year he’ll be at NQs Rock’n’Country and the Gympie Music Muster before CMC Rocks in September.