World renowned tabla player Bobby Singh (also a member of The Bird and Circle of Rhythm) says Djan Djan creates a “groove-based and melodically rich” sound that represents the music of Australia.

“The music of Djan Djan crosses all borders; it doesn’t have a particular sound that is true to one place, it’s true to the world. To me this is the music of Australia,” Bobby said.

“With deep love and respect for tradition, culture and our audience, we blend the music of Africa, India and Australia and then use improvisation to create a contemporary and intoxicating sound that echoes all three of these continents,” he said.

“Our music is a mix of folk, blues and world music; it’s groove-based and laid-back, but at the same time melodically rich and uplifting. And because we use a lot of improvisation, the music is also very fun,” he said.

Bobby Singh spent his childhood in Mumbai studying tabla and is a disciple of maestro Aneesh Pradhan. Celebrated in both classical and contemporary circles, Bobby has performed and recorded with John Butler Trio and Cat Empire among others.

Winning a Grammy for his latest album, DOuga Mansa, Mamadou Diabate is a world renowned master of the kora (a 21-string West African instrument that sounds similar to a harp). Cousin and student of legendary kora player Toumani Diabate, Mamadou was raised in the griot tradition of Mali, using music and oratory to preserve his peoples’ history and culture.

All regular performers on the Australian festival circuit, the members of Djan Djan met at different festivals and, after hearing each other play, decided they wanted to play together. The trio formed in 2008 and headed straight into Melbourne’s 30 Mill Studios to record their debut self-titled EP, which they accomplished in just two hours.

After touring the music from their first EP (now out of print), Djan Djan entered the studio again to record another five tracks (this time in less than two hours) to expand their EP into the full-length self-titled album.
Djan Djan will launch their 10-track album (ABC/Universal) at the Judith Wright Centre on Friday 19 March 2010.

“Jeff Lang is one of those people who has music dripping from his fingers.” Courier Mail on Jeff Lang 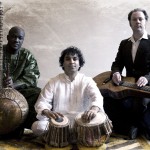