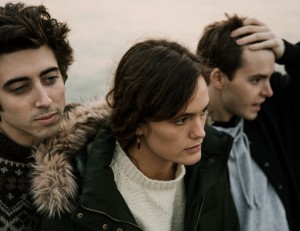 “…[there was] something beguiling about the way singer Kelly Zutrau conducted herself. She sounds like Madonna, circa ‘Like A Prayer’, which is great because even the way she gawped at everyone – sullen, sulky, pissed off but still a bit playful – had a touch of Ms Ciccone about it too.” – NME

“Immediate stand-out: Kelly’s vocals. Just flawless, with a clear and beautiful lilting quality that gives her lyrics their required depth… At times, the desperation in her lyrics is hard to bear.” – Zan Rowe, triple j

Comprised of Kelly Zutrau, Martin Sulkow and Joe Valle, Wet have been making music together in various outfits since meeting as students in New York in 2006. What began as a long-distance collaboration between Providence, New York, and Los Angeles culminated in breakthrough single of late last year ‘Dreams’ – a track readily added to full rotation on triple j and boasting in excess of 300,000 plays online.

New single ‘You’re The Best’ proves a worthy successor; mastering the delicate balance between slow motion R&B and minimal indie pop. The single is released next Monday, March 31 – via Dew Process – followed by Wet’s self-titled EP at the end of next month.