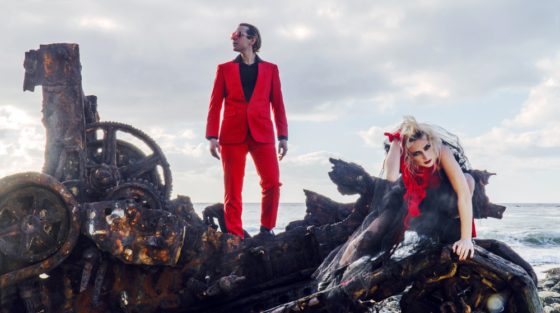 War Twins has become known for their dynamic live set full of passionate energy, rock n’ roll soul and deep electronics. A growing buzz has taken them from their hometowns on the east coast to a string of successful nationwide tours and their new home in Los Angeles.

The duo was founded by singer/songwriter Gaetana and drummer/producer James Grey. Beginning in early 2013, the band built a bed in the back of a ‘98 Plymouth Voyager, and promoted their first demo on a tour that took them to over eighty cities. Since, they’ve performed close to 500 shows across the country to date.

Most recently, War Twins has supported international acts such as Wolf Alice, Alien Ant Farm and Filter, with additional performances at SXSW, Catskill Chill, Slingshot and other festivals.

Thanks to the help of their fast growing community, through crowd-funding, War Twins spent time in late November 2017 recording some of their newest music with grammy award winning producer, Sylvia Massy (Prince/ Johnny Cash/ Red Hot Chili Peppers), which will be released in early 2018.

This video is a compilation of footage taken across America, from attending protests in Las Vegas, to rocking out in New York clubs. It also features some behind the scenes shots of recording the album at Sylvia Massy’s beautiful studio in Oregon. The video reflects a lot of the lyrical theme in ‘American Kids’ in its satire and commentary, but also the tongue-in-cheek humor poking at ourselves as much as anything else.