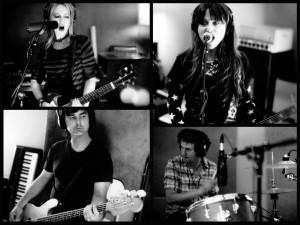 The September tour for recently reformed Alt Rockers, Veruca Salt has proved to be an absolute smash! With Melbourne’s Corner Hotel show selling out within 8 hours of going on sale and now the Factory show in Sydney has also sold out, it seems everyone needs a bit of Salt in their diet!

As a result of the extra shows, the Perth date @ The Rosemount has moved to Saturday, Oct 4

Featuring All Four Original Members For The First Time Since 1998

Finally! The news Veruca Salt fans have been waiting yeeeears for!

The original members of Veruca Salt, Nina Gordon, Louise Post, Steve Lack and Jim Shapiro recently announced an epic reunion tour that seems them playing their first shows together since 1998, and we are stoked to say Australia has been included in those plans which will see them here in September!

Born in Chicago in 1993 out of singer-songwriter-guitarists Louise Post and Nina Gordon’s desire for a dreamy-grunge band with influences like Big Star, My Bloody Valentine and the Pixies, they soon made the transition from cutesy pop upstarts to big league wet dream rock queens and became one of the most important bands of the 90’s in the process. Their sugary sweet vocal harmonies sat perfectly with their huge fuzzy rawk riffs and it sounded oh so good!

Their live shows were energetic and frantic with the band jumping all over the stage doing scissor kicks, mimicking pogosticks, head banging and just plain rocking out. Everything a fun rock show should be and that energy will once again manifest for fans and band alike.

If their two new Record Store Day teaser songs, It’s Holy and The Museum of Broken Relationships are anything to go by, long-time fans will be ecstatic to know the band are returning to the raw-edged sinister sweetness of their early days.

This full-fledged comeback will see their biggest hits Seether and Volcano Girls played alongside fan favourites like Shutterbug, All Hail Me, Born Entertainer, Officially Dead in all their angst-ridden, harmonious glory as the Salt are “busy relearning all our old songs and recording new ones” as we speak.

These shows will sell out quick so make sure you jump in early and secure your tickets cause the Volcano Girls really can’t be beat! You can’t fight the Seether!

Tickets are only $59 + booking fee and available from metropolistouring.com