Veara returns with a new album Growing Up Is Killing Me, out September 24 on Epitaph Records. This is the follow-up to their 2010 debut release What We Left Behind.

Brand new track The Worst Part Of You.

For the unfamiliar, Veara guitarist/vocalist Patrick Bambrick, bassist/vocalist Bryan Kerr and drummer Brittany Harrell have been playing together for over a decade. However it wasn’t until lead vocalist/guitarist Bradley Wyrosdick joined the band in 2008 that Veara as we know came into existence. In 2010 the band toured with A Day To Remember; and their debut What We Left Behind garnered the band accolades from Alternative Press, Outburn, Blurt Magazine, and more.

Inspired by bands like No Doubt and Foo Fighters who have found their own sound without being pigeonholed into one genre, Veara brings Growing Up Is Killing Me – the latest from the powerful, Peach State band. It was recorded with Dan Korneff (Pierce The Veil, My Chemical Romance, Paramore) at House of Loud studio in New Jersey over a two-month period.

But beneath the music layered with power chords and insanely infectious lyrics, the band has an urgent message about life, friendship and betrayal.

Patrick Bambrick states: “When we say ‘Growing Up Is Killing Me’ it relates to the fact that you don’t have the same outlook on Christmas morning when you’re 28 as you did when you were eight years old. We’re not judging those feelings but sometimes it hurts to see those types of experiences change and watch time go by so quickly as you get older.”

Veara is eager to share their music as a form of therapy and a celebration of life. Growing Up Is Killing Me is about life’s growing pains and universal struggles. They hope that when fans listen to the album, they know that they are not alone in the process of growing up.

Catch Veara’s energertic live experience as they head to our shores on the Vans Warped Tour in support of Growing Up Is Killing Me. 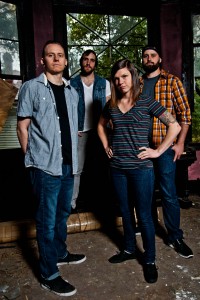