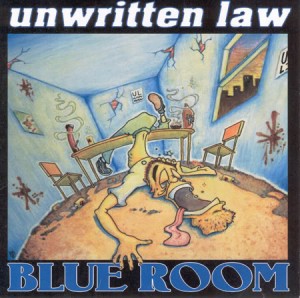 I have to admit, I had kind of forgotten about Unwritten Law for awhile now but when I heard they were remastering Blue Room, their debut released in 1994, I was pretty stoked (no offence but the original sound quality-wise was a tad shocking), it was a great album! For those who haven’t listened to Blue Room, and are familiar with Unwritten Law’s newer stuff, post-2002, then listen to this! It is completely different, but Blue Room showcases the band at their best and in their early days with their 90s punk rock sound.

With the release of Elva in 2002, and their delve into a harder rock-dominated sound that did gain them more mainstream attraction but lost a fair few of the early punk-loving fans, Unwritten Law said their goodbyes to their much appreciated 90s punk sound and hearts were broken. However, many, I’m sure, even myself included were surprised and definitely pleased to welcome Unwritten Law’s first full-length back into our lives and onto our iPods/computers or even stereos.

For those however, who will be tuning into Blue Room as first timers, or even long time fans enjoying a trip down memory lane, some definite winners of Blue Room would have to be ‘C.P.K’ (aka Crazy Poway Kids), which coins its name from the boys hometown, Poway California. It is a great energetic number that gets the album racing along. Fun, crazy and fresh, “C.P.K” will always be a favourite and definitely is a great first track to introduce yourself to older Unwritten Law, with its fast-paced guitar and drums it is very 1990s punk rock at its best.

Another favourite and definitely up there for me is “Shallow”. Insanely infectious and just an all around great song, that due to its popularity with the release of Blue Room was re-recorded and released with Unwritten Law’s second full-length, Oz Factor.

“Suzanne”, another hit that was re-recorded for Oz Factor, and received much fan love is definitely a high point of Blue Room. Short and sweet, well as sweet as punk rock can be, it is a great song to lose control too and it definitely echoes older Green Day. With Scott Russo kicking it on vocals and the amazing drumming following close behind, it really is understandable why “Suzanne” quickly became a favourite.

Blue Room was definitely a great punk rock album from the early 90s, and it introduced Unwritten Law to the San Diego music scene of the 90s that pumped out another punk rock favourite with Blink 182. Blue Room is always worth a listen, even if it is to reminisce on what you miss about Unwritten Law’s older style. After you listen to it though it will be clear why tracks like “Shallow” or “Suzanne” went on to become fan favourites that continue to be loved and listened to.

Though I’m particularly fond of Unwritten Law’s newer material, including “Swan”, released March this year, it is always nice to reminisce and go back to Blue Room, which I think really showcased Unwritten Law’s talents, and I definitely think it is a good place to start if you haven’t listened to them at all.