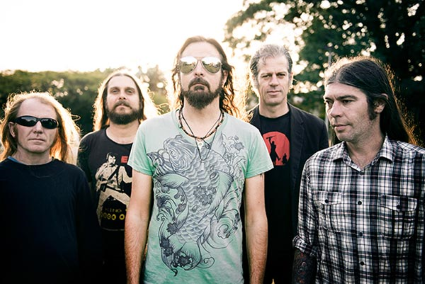 20 Years ago a Galactic idea was born. As it was flung into space, the energy transmuted into vibration…and become audible. It Was Galactaphonic.

Now – in 2015 the idea has become SuperGalactaphonic.

Buoyed by the sleeper success of their debut album Tumbleweed in 1992; a period that saw the band tour the US, Europe and the UK, infamously support Nirvana on their 1992 Australian tour and criss-cross Australia playing countless dates – 1995 saw Tumbleweed release the epic Galactaphonic album on Polygram.

The first single ‘Gyroscope’ and its accompanying EP introduced the tone of the record late in 1994; the lead track was 3 minutes of heavy, glorious, riff-laden, wall-of-sound fuzz which scored the band a Top 50 singles entry. The thunderous ‘Hang Around’ followed in April, again breaching the ARIA Top 50 chart. A month later, the Galactaphonic album itself was unleashed – debuting at #6 on the ARIA chart and saw the band appear in the loungerooms of the mainstream via TV performances on Hey Hey It’s Saturday and Denton. Propelled by four and five gigs a week and a subsequent single ‘Armchair Ride’ alongside fan favourites TV Genocide, Nothing To Do With The Weather, the album enjoyed a six week stay in the ARIA top 50 and now enjoys sales of over 30,000 copies, cementing Tumbleweed as one of the hardest-working and most-loved bands of the era.

20 years on the album enjoys a strong legacy – with Galactaphonic-era tracks making up a big portion of the band’s incendiary live shows. Singer Richie Lewis remembers “Out of a tumultuous storm in the craziest of times Galactaphonic was like trying to bottle a wasp nest. But we had it, and in comparison to the first record I thought this one was vibrant and electric, dangerous and sweet. Every waking hour was about the band, we soaked up everything around us, mixed it up in our whirlpool and channelled it into the album”.

Now in 2015 – Galactaphonic becomes ‘SuperGalactaphonic’ with a reissue this August 7th, accompanied by the Galactaphonic 20 tour. The reissue collects the original 13 track album and expands it to a sprawling 34 track celebration.

Included in the set are the 9 B-Sides/EP tracks from the album – now made available digitally for the very first time. Also part of the set are 7 previously unreleased live tracks from triple j sessions around the release (4 from triple j Live At The Wireless and 3 recorded by Triple J at Livid 1995). The reissue is rounded out by five cassette demo recordings recently unearthed by the band; alternate versions of ‘Hang Around’, ‘Gyroscope’ and B-Side ‘Round The Bend’ – alongside two wholly unreleased-in-any-form tracks ‘Salamander Sam’ and ‘Paddy The Pram Man’.

Galactaphonic – the original album will also see release on vinyl for the very first time in August.

In 2009 the opportunity presented itself for a reformation, playing Homebake and selected shows including 2010’s Big Day Out. Around the same time – a retrospective of their early EP’s and first album was issued – ‘The Waterfront Years 1992-94’.

A brand new studio album ‘Sounds From The Other Side’ followed in 2013 with comprehensive tour activity since.

The Tumbleweed family was shaken to the core by the sad passing of foundation bassist Jason (Jay) Curley in 2014.

This return to the stage and reissue of Galactaphonic makes this next brave chapter of the Tumbleweed journey an emotive and powerful one for the band and their fans.

Richie Lewis remembers – “We burned so brightly that the world around us melted. We lived fast, riding a whirlwind and leaving behind a trail of destruction.”

It’s this energy that powers the SuperGalactaphonic 20 reissue and tour.