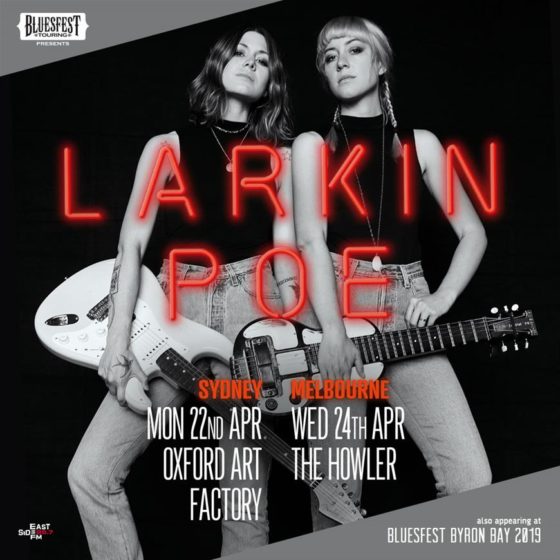 Bluesfest Touring is proud to present Larkin Poe, the American Blues-Rock band who will be performing their gritty, soulful, southern heritage in Melbourne and Sydney this April. Originally from Atlanta, the now Nashville based sister duo are poised to make a mark all their own with the release of their fourth album ‘Venom & Faith’ which is out this November 9, 2018. According to Rebecca Lovell “It’s a celebration of American roots music as translated by two sisters who are playing the blues in a modern age”.

“Larkin Poe are not only highly professional, nearly perfect musicians, they also manage to add a new passion, modernity, and elegant coolness to the genre of Rock” – Vogue

“A sister act with staying power”. NPR
Rebecca and Megan Lovell, the multi-instrumentalist sister duo are descendants of tortured artist and creative genius Edgar Alan Poe and ‘Larkin Poe’ was the name of the sisters’ great-great-great grandfather.
The Lovell sisters are known for blending Haim-esque vocals with guitar riffs, helping them accumulate backing musician slots for artists such as Elvis Costello and Conor Oberst and performances on stages at the 2014 and 2016 Glastonbury Festival as well as Bonnaroo and Lollapalooza.

Creating their own brand of Roots Rock ‘n’ Roll: gritty, soulful, and flavoured by their southern heritage, Larkin Poe are on the rise and rise. Don’t miss their sideshows in Sydney and Melbourne in 2019.